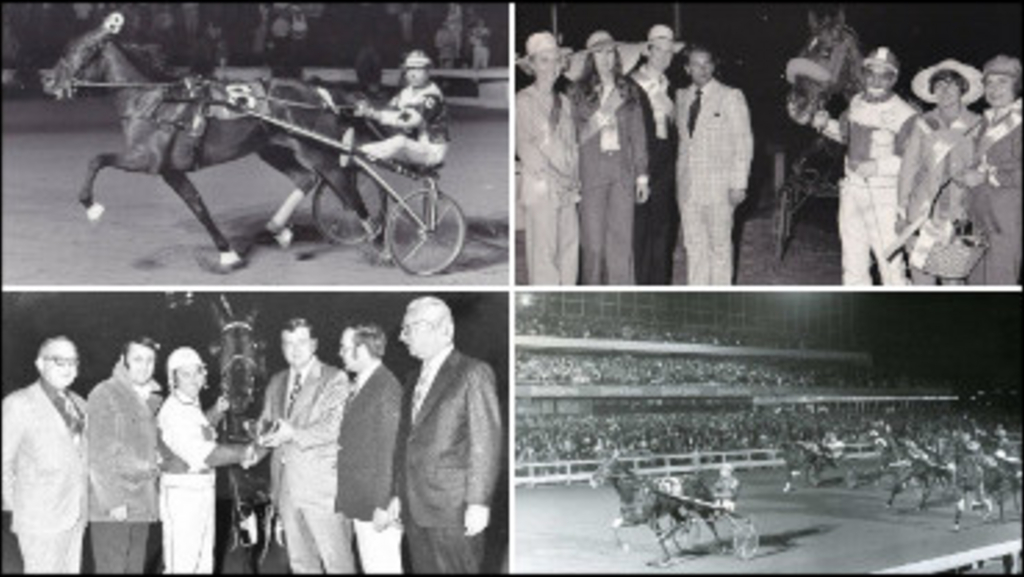 It's Picture Parade time again, and this time, Robert Smith has assembled quite a collection of old photographs for your viewing and guessing pleasure.

By now, most people have to be tuned in to the rules, so if you're so inclined, let's see your best guesses on as many or as few as you choose. Good luck.

As with a number of past Picture Parade columns this one has a central theme. All of today's vintage photos were taken at the famous and now defunct Roosevelt Raceway located at Westbury, N.Y. on Long Island. This iconic old track was originally built as an automobile racing facility but was later converted to harness racing. It opened in September 1940 as the original night time and operated until 1986 when its doors closed forever.

Throughout much of its existence Roosevelt was the showplace of harness racing and played host to huge crowds and presented the sport's headline events. Many Canadian drivers raced there and were usually among the leaders in all categories. Today's pictures all feature Canadian born drivers as the winning driver in each photo. Have fun!

#1 - Representatives from a New York City department store were on hand to make a presentation to the winning driver. The store had just introduced a new line of cosmetics and presented a basket full of the new products to the driver. Can you identify this lucky fellow?

#2 - This picture is by far the oldest of the group and was taken in 1948. Can you name the winning driver who was among the earliest drivers to compete there? You might as well take a stab at identifying the horse while you're at it. (Harness Horse photo)

#3 - In this photo we have two Canadian born drivers competing for the top spot. It looks like the pilot of No. 7 is the winner but the second place horse's driver is quite visible so let's include him too. A word of caution; take a real good look at the winning driver before making your final decision.

#4 - This Canadian born lad was no stranger to winning races wherever he appeared. Can you put a name on him?

#5 - A lot of people in this one and I can only assume they were all involved somehow in the presentation and cause. The task at hand is to name the driver if you can.

#6 - This fellow was a consistent winner in the later years at Roosevelt. Can you name him?

#7 - This driver was a big hit wherever he raced and from the looks of the crowd in the background the place was pretty full on this occasion. Who is he?

#8 - Just a great winning picture. On this one you have to not only name the driver but also the horse. No clues given on this one.

#9 - Looks like another packed house. Can you identify the man in the sulky in this old photo; he was a regular there for a lot of years?

#10 - How could you have a collection of pictures from Roosevelt and not include this fellow driving no. 7? A good way to close out the group of 10. If you happen to recognize this homme, let us know.

Closing Note - The huge crowds shown in the background of a number of today's pictures show the tremendous popularity that harness racing enjoyed for many years.

Can you correctly identify?

Trivia Question & Picture - In 1958 a then popular T.V. show filmed an episode at the Roosevelt track. The above photo was taken during that filming. Can you name the show that was featured?

Can you put a correct name on this very accomplished fellow?

A note was recently received from Dan Donohue, a reader of the Standardbred Canada website and is shown below:

"My father Frank raced at Greenwood for years, driving such horses as Johnny Forbes C, The McNab, Miss Vera Gratton, and Gratton Hal G; I always went to the cafeteria on the backstretch, and it was run by Tom and Nancy, but I can't think of their last name; any help would be appreciated."

The correct answers for this…

The correct answers for this week's pictures on "Picture Parade" were as follows:

The trivia question was correctly answered as the "I Love Lucy Show" which had an episode filmed at Roosevelt Raceway in 1958. Special thanks to Hector for his additional info.
The "Who Else Is It?" person was Ben Webster. the late great horseman who starred at Roosevelt for many years
The Greenwood Trivia question was answered as Tom Belanger cafeteria operator which I assume was the correct identity. Pretty hard to question anything told by the trusty pair of Garth and Ronnie. Thanks to everybody for your answers.

I would say the group has…

I would say the group has answered all the questions correctly so I won’t comment. But what I will comment on is Dan Donahue's question. With help from Ron Waples the gentleman’ name that ran the restaurant on the backstretch at Greenwood was Tom Belanger.

Can You Correctly Identify ?

The show was The Lucy-Desi Comedy Hour and in this particular episode Lucy had won a standardbred racehorse in a draw sponsored by some cereal company. In typical Lucille Ball fashion it turned into a hilarious event. That is Lucy driving the horse and the other photo is her sidekick Ethel (Vivian Vance) with the binoculars and the superstar actress Betty Grable (making a special guest appearance) sitting beside her. In real life Betty and Lucy were big fans of horse racing and attended the horse races frequently.
The standardbred industry and Roosevelt Raceway got tremendous positive coverage as a result of this particular episode!!!

Who Else is it?
Benny Webster

Those pictures are from I Love Lucy. I was told that for some of the driving shots, Jack Richardson's hands were involved