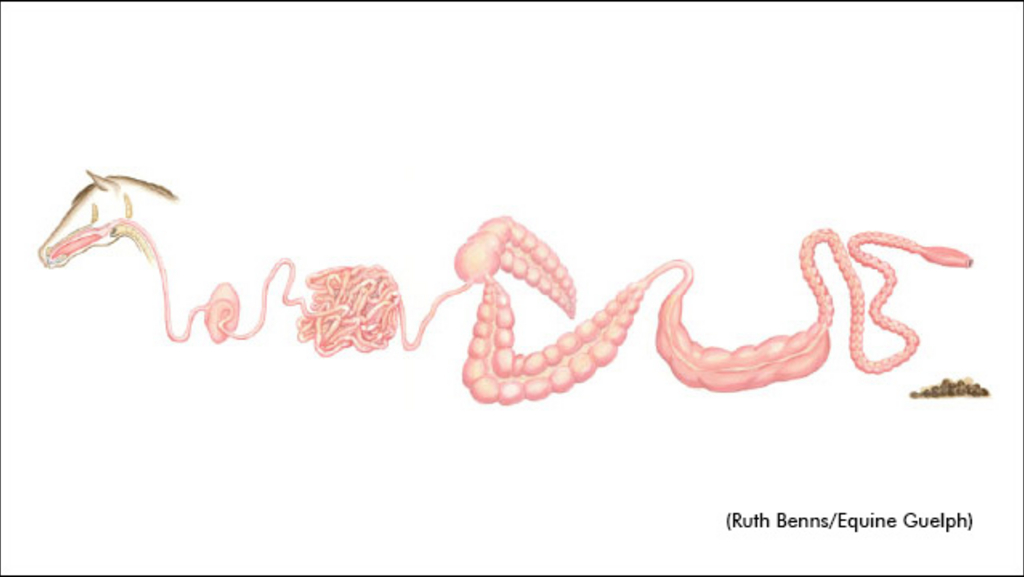 Approached by GS Organic solutions out in B.C., Pearson has been investigating the potential for Gs Formula to improve gastric health, particularly for horses with a history of lower severity colic episodes.

A feed additive that can accelerate transit time of food through the horse’s digestive tract could prove hugely beneficial to horses at risk for developing impaction colic.

The second in vitro study also pointed to a role in accelerating gastric transit time, noting that small pieces of gastric mucosa cultured in the presence of Gs Formula produced an increased amount of a hormone (gastrin), which promotes contractility of the stomach.

Watch the following video interview as Dr. Pearson elaborates on the research and shares what happened in the third study involving Standardbred racehorses.

Dr. Pearson has been involved in Nutraceutical studies since 1997 and can attest to the progress in the field as far as regulations go, including there is now oversight from Health Canada. When asked the hallmarks of a supplement backed by research, Pearson said, “A horse person’s best protection is to buy products from companies that invest in objective third party research.” Pearson goes on to explain efficacy research is still a big problem. A lot of the research that’s used to scientifically back products is not on the actual product; it’s on research that other companies have done on similar products, or from research on individual ingredients. But there are a few equine supplement companies making substantial investments in their product line by conducting evidence-based product research.

“The future of nutraceuticals is very exciting, and the sky is the limit,” said Pearson. “The interest and the availability of research funding for this type of research is growing and that’s really coming from the manufacturers, so they deserve a big shout out.”

(With files from Equine Guelph)

I’m glad to see more research regarding supplements as this is an area where we lack efficacy studies.
I just wanted to raise a few flags related to this study, however;

This product (mentioned in the article) contains hemp. Although the company’s website says that it has been “forensically” tested to be free of THC, it is possible that it is has very low amounts of CBD. Given the sensitivity of testing in the racing industry this could potentially result in a positive test. The company has an alternative product that replaces hemp with chia for those in racing and other regulated equine sports. That product has not yet been tested though. As with all supplements, it’s important to read the label and consult the CPMA if you are concerned about any ingredients.
This study was NOT done on racehorses but on two-year-olds in training – hence the hemp wasn’t a concern for the horses in this study.

As an aside, in racehorse medicine we are generally not looking to increase transit time of feed through the gastrointestinal tract of normal horses. Because of the consistent and type of exercise, horses racing or in training already have a faster transit time than sedentary horses.
It is important to note too that the number of horses used was small in this study with only three completing the entire trial, 2 removed for illness, and 5 of the 8 horses replaced with different horses before the end of the trial.

One of the interpretations of these results was that this supplement could be good for horses at risk for colic because it “significantly decreased biomarkers in the blood associated with an increased risk of colic”. Rouleaux formation by red cells was identified as one of these biomarkers, however, rouleaux is normal in equine red blood cells ( rouleaux is a characteristic of equine blood cells – they show stacking like a roll of coins on a blood smear). Rouleaux by itself is not something used to determine if a horse is at risk for colic so one should be cautious assuming this product has any protective effect for colic.

The marginal increase in sodium could be explained in different ways so to emphasize what Dr. Pearson alluded to, there is no evidence at this point that this product would delay the onset of fatigue or in any way affect performance ( although it sounds they will be looking at it further perhaps).

Looking forward to future supplement research particularly that which can be applied to the harness racing industry.