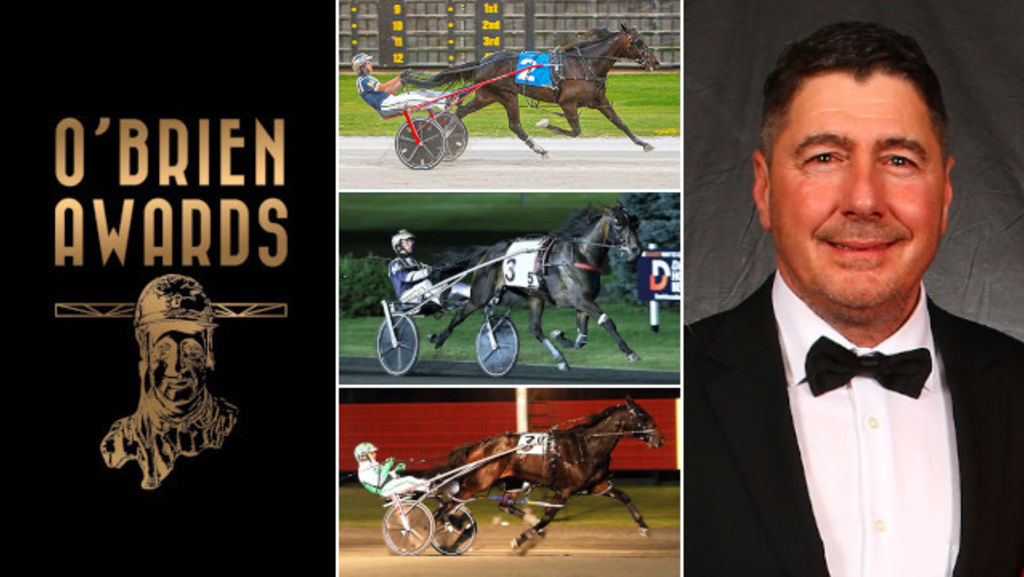 Luc Blais calls 2021 "my hardest year" since he became private trainer for the Montréal-based Determination Stable almost a decade ago.

Overseeing a 30-horse stable on two sides of the border during a pandemic was a challenge in itself. Disappointments and injuries with some of the young horses made things even tougher.

"It's a nice honour," he said, "but you'd never get there without your team."

His team and his knowledge, stamina and organizational skills as a trainer certainly were tested in 2021.

"I must have gone back and forth across the border 10 or 15 times last year," said Blais.

Because Ontario racing was shut down in the spring, half the stable shipped to New Jersey to be ready for the start of the U.S. stakes season.

Early results were modest, and the experiment won't be repeated this year, but the stable finished the year well.

Trotter Forbidden Trade, a former Canadian Horse of the Year, didn't make enough starts in Canada to be eligible for an O'Brien in 2021, but he was the stable's MVP, rebounding from a so-so season at four to win four stakes -- including the TVG Open at the Meadowlands and the Earl Rowe at Georgian Downs -- and blowing past $2 million in career earnings with a $631,300 year.

"He was happy and full of himself when we stopped him. He finished the year in good shape...better than when he started," said Blais of Forbidden Trade, who was named U.S. Older Trotter of the Year.

Donna Soprano had soundness issues and made only nine starts, but won three of them, including the race Blais calls his highlight of the year, the $414,000 Elegantimage final at Woodbine Mohawk Park, where she surrendered the lead on the turn to heavy favourite Bella Bellini but then dug in again in the stretch to overtake that rival for a half-length score.

A pair of trotters who were stars for Determination at two, On A Streak and Macho Martini, made no impression at all at three. Macho Martini didn't win a single race in 2021, after raking in $450,000 at two. And the stable's two-year-old crop had no standouts.

But a couple of old-timers showed that waiting can pay dividends. Enavant, a lightly-raced pacer by Somebeachsomewhere, made $196,340 at five and won the $100,000 Potomac Pace at Rosecroft in a career-best 1:48.

"It was his first year on the Grand Circuit. He got a little tired at the end but he showed he can race there," Blais said.

Trotter Warrawee Roo, after a layoff of more than two years, won five races and $112,640 and is now within striking distance of $1 million in career earnings.

It's still too early to tell who will and won't be coming back in 2022, Blais said, but most finished the year in good order.

He's now in the process of grooming the next generation of Determination prospects, 14 horses acquired at North American yearling auctions last fall. They include a half-brother to Enavant by Bettors Delight.

"They're a nice group with good heads. They weren't hard to break," he said. "How they'll do on the track is another question. That's where the game is played. A funny year (like 2021) is a reminder that you never know who's going to step up."

The 2021 Virtual O’Brien Awards Gala takes place on Sunday, Feb. 6, 2022 and will be available for viewing on standardbredcanada.ca from 7 – 8:30 p.m. (EST). Keep up to date on the event details on social media by following the O’Brien Facebook Event Page.