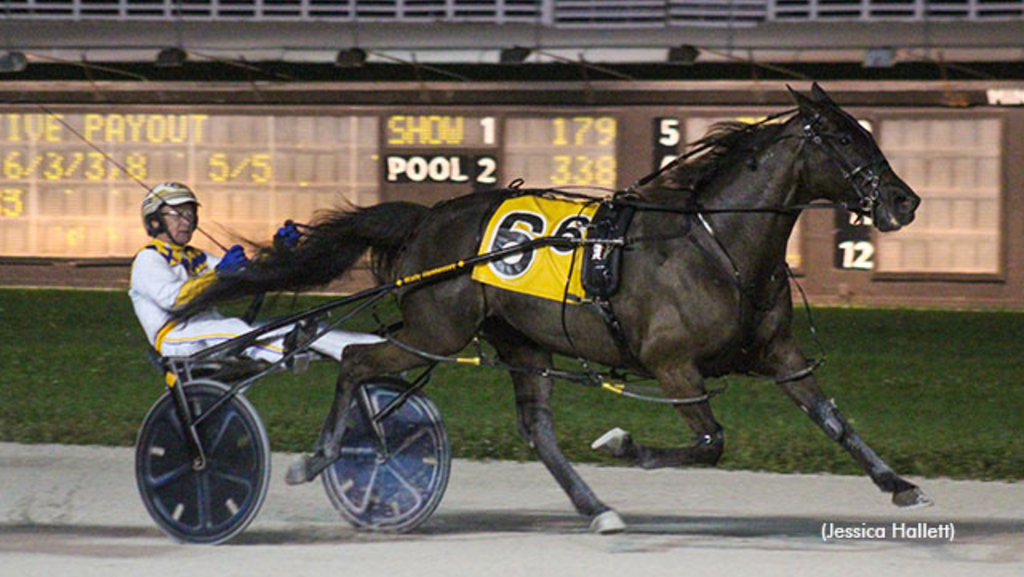 The ultra-consistent seven-year-old daughter of Shadow Play overcame the outside post and five worthy rivals to hit the final beam in 1:52.

Her winning margin was three-parts of a length over the late-charging Crisp Mane (David Miller) with Image Of A Dream (Rick Plano) third, just another nostril away. Sweet Heaven, the early leader finished fourth, within a length of the winner, while Bye Bye Felicia, actually closing fastest of all, picked up the nickel in this top notch sextet.

As the wings folded, Hennessey sent Sea Shadows in search of the lead as Sweet Heaven also darted out with alacrity to take the field to the opening panel in :27.3. One stride after breaking that first beam, Sea Shadows forged her way to the top and carded fractions of :56 and 1:24 before her :28 finale sealed the deal.

In a post race interview, Hennessey related, "You know, this mare brings me back to the grand days of another mare I trained and drove for a long time, Godiva Seelster, who was consistently great week after week. This mare has developed that same will-to-win attitude and it doesn't matter if she's on the lead or on the prowl. She just has that determination that makes her a great mare.

"I actually thought I was going to get the garden spot when Mac's mare (John MacDonald driving Sweet Heaven) left so alertly like she always does. But my mare seemed like she wanted to go on...and I let her. It's not a good idea to fight with a lady, you know!

"From there, she just kept rolling along and was a strong at the finish as she was at the start."

Trained by Hennessey for owner Paul O'Neil, Sea Shadows won for the 33rd time in her career, pushing her lifetime bankroll to $252,401.

The $12,600 Open Pace for mares was taken by LA Always Amartini, with Joe Chindano Jr. in her sulky for trainer Angela Coleman and owner Fox Racing.

The seven-year-old daughter of Always A Virgin, who had been knocking at the door over her last three starts, finally reached the winner's circle with a sharp 1:52.1 performance, with fractions of :27, :56 and 1:24 along the way.

Her margin was a widening two lengths at the wire with Talk Show Chica (Corey Braden), in the garden spot most of the way around, second and Sunrise Hanover (Dave Ingraham) third. Protect Blue Chip and Dont Chip Me picked up the minors in the field of seven.

In getting her initial win of the 2022 season in three starts, LA Always Amartini picked up win number 15 lifetime to vault her earnings to $298,613.

As the 2-1 second choice, LA Always Amartini returned $6.20 to her faithful.

Chindano, by the way, had a driving double on the card, as did Wally Hennessey and Andy Shetler, who swept the late double.

One of Chindano's wins was in a dead-heat as Powered By Mach tied with Riggins Wind (Braxten Boyd) in a $9,400 conditioned event for mares kicking off a Pick-6 sequence returning $2,590.50 for a 50-cent ticket.

Racing continues on Sunday with a competitive program featuring a $15,000 guaranteed Pick-4 pool bolstered by an industry low 12 per cent takeout. The Super Hi-5 finale has a carryover of $50,778. Post time is set for 7:20 p.m.