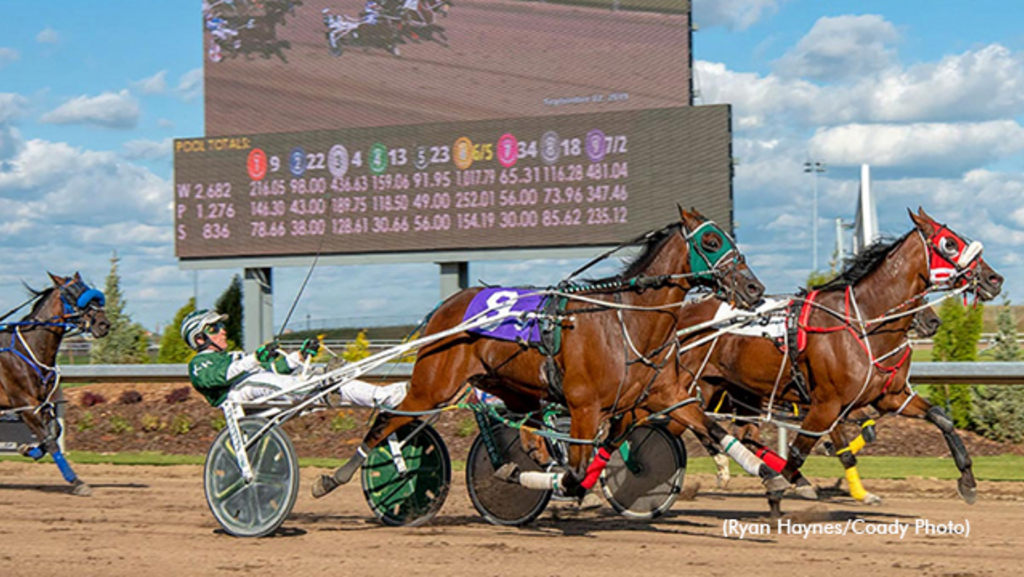 Tyson Jacoby finally listened. “The horses kept calling me back,” said Jacoby, who just got his harness racing driver’s license scoring a perfect score in each of his 10 qualifying races -- four of them at Calgary’s Century Downs and the last six at Century Mile.

“I’ve been around harness horses most of my life. But I was working factory jobs and while I always wanted to come back I was waiting for the right time,” said Jacoby, 38, who decided two years ago that then was the time.”

Since then Jacoby has been able to get his tutelage from two of the best drivers in Alberta: Rod Hennessy and Rod’s son Mike. Rod, perennially one of Alberta’s top trainers and drivers, won 2,831 races as a driver; Mike has won 983 races. They have both given Tyson lots of tips and -- judging by his progress in the mornings -- it is paying off.

“Ty worked around horses forever -- most of his life actually,” said Rod, who still trains but called it quits as a driver last October after a training accident. “I was jogging a horse at the farm in Falun (31 km west of Wetaskiwin). The horse got scared by a deer. The horse went west and I went east.

“At 67 years of age, I don’t bounce the way I used to; I go flop. I tore the rotator cuff and broke a bone in my shoulder.

“Ty is going to be a good driver. His dedication has been great and his horsemanship will be his strength; he understands a horse. He talks to a horse through the driving lines; he’s good that way.”

Two years after Tyson’s mother died in a car accident in 1993, he moved in with Rod, Rod’s former wife, Liz, Mike, and Rod and Liz’s daughter Katie.

“My dad, Gary Wolsey, was an alcoholic and he wasn’t home very much. He was a groom in both harness and thoroughbred racing. In harness racing, he worked for Rod too. He also worked for Brandon Campbell and Gary Clark.

“Eventually he just stuck with harness racing so he was gone most of the time,” said Jacoby, of his father who died four years ago from a brain aneurysm. “It just wasn’t going to work out.”

“I told Ty that if he needed a place to live, he could always come with us,” said Rod. “He was always hanging around with us all the time anyway. He and Mike are both the same age.

But before Tyson came back to harness racing, he had other things he wanted to do. Rodeo was at the top of his list. First a steer rider, he soon graduated to riding bulls in Ontario when he was 18.

One time, in 2002, Jacoby was seriously injured when he broke his neck.

“I was riding too far back and the bull jerked me down,” recalled Jacoby, speaking from Rod’s shed row at Century Mile. “My throat hit the bull’s horns and cut my wind pipe. It was so bad that Liz flew out to Ontario to say goodbye. The doctors weren’t sure I was going to make it.”

That was by far the worst rodeo injury but it certainly wasn’t the only one.

“I broke my lower legs, my ankles and I had several concussions,” said Jacoby, who also broke his arm in a car accident. “I’ve broken almost all the bones in my body. About the only bones I didn’t break were my femurs,” said Jacoby, who did make both the Ram Rodeo Finals and the Foothills Cowboys Association’s Finals every time he wasn’t hurt.

“Rodeo is a young man’s sport. You can only ride bulls for so long,” said Jacoby, who finally quit rodeo and took jobs in factory machine shops eventually getting his heavy equipment ticket to operate heavy machinery like excavators, backhoes and bull dozers and his Class 1 license to drive big trucks. But something was missing.

“I needed some adrenalin to keep me going so I came back to harness racing with a goal of getting my driver’s license.”

Jacoby said coming back to harness racing and leaving the factories was “an easy switch. I know what I’m doing with both of them.”

But he knows he still has lots to learn.

“One thing about this business is you never stop learning. You can never think that you know everything. Mike and Rod are constantly giving me tips. They’ll let me know if I pull a horse out of a hole too early or too late or if I’m going too fast or too slow.”

Horse Racing Alberta judge Brent Grundy said, “Tyson is good to go. We rate a driver from one to five points and he got a five in all of his 10 qualifying races. You need a total of 50 points so Tyson did it in the least amount of time possible. He pays attention to what’s going on ahead of him; he’s been good.”

But Grundy cautioned that a qualifying race and a real race are two very different things.

Loving the excitement of harness racing and trying to figure out what makes a horse peak in his performance, Jacoby isn’t sure when he will get his first drive in a pari-mutuel race.

“I thought I might have had one this past weekend. Maybe this weekend I’ll get one. It would be easier if I had a horse of my own. It’s hard for people to trust a new guy. I’ve been doing it for a lot of years. I was born on the track -- I’ve been there since I was 10 -- but I’m still a rookie. But whenever that happens, it’s going to be a thrill.”

I just want to say that what…

I just want to say that what the Hennessys have done for this young man, from what I have read, is a wonderful display of human compassion. I don't know any of these people but they all exemplify what I imagine people should be. Tyson is a very lucky person to have enjoyed the care extended to him by the Hennessy family however I suspect he has earned a lot of that along the way. What a great story of people caring for people. Thanks for making my day better. Everyone take care.