The Right Horse At The Right Time 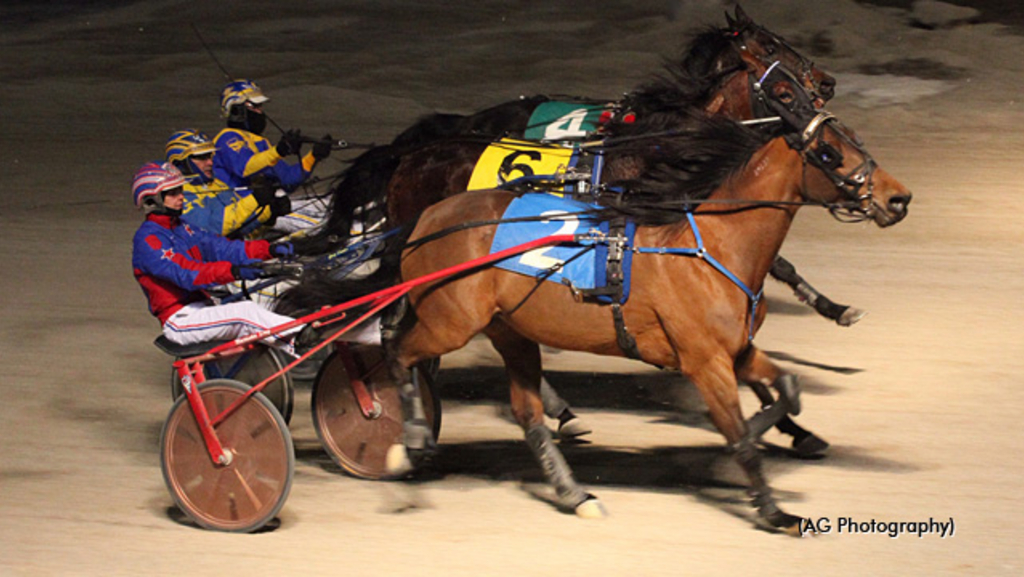 A mainstay on Ontario’s circuit of racetracks, Natasha Day had just happened upon a quirky trotter during a qualifying session — a horse she wasn't listed to drive or connected to in any way. A coincidental sequence of events gave her the opportunity to purchase that trotter, who has since become a stalwart and the "breadwinner" of Day’s stable.

The trotter is Sizzlen Hot Herbie, a now eight-year-old gelding by Here Comes Herbie. Dave Wilkinson purchased the gelding, who had been racing stateside, and shipped him north to qualify at Clinton, where Day had a chance to watch the trotter.

“Ryan Holliday drove him, and I drove in the qualifier with another horse,” Day said in a recent COSA TV feature interview. “I saw him trot around, and he trotted in like [1:]59; qualified super. Then I happened to watch him race at Georgian Downs and he made a break. The guy who owned him then, who just bought him out of Ohio (Dave Wilkinson), he was stabled right next to me at Georgian. I happened to go up to him and I said ‘He’s a nice horse, this horse. Unfortunately he made a break, but he qualified so good.’ And Dave actually said to me ‘Well, will you go to Clinton on Sunday again and would you drive him?’ I said ‘Yeah, yeah. No problem.’ I went and I drove him. Dave kind of said ‘Oh, you’ve got to watch him. He’s pretty aggressive and strong. He might pull and run away on you. I’m not sure if you’ll hold him.’ So I went and drove him, and he was a kitten; he was great.’”

Day got the opportunity to drive Sizzlen Hot Herbie in his second pari-mutuel start in Canada against Preferred 3 company at Grand River Raceway. Off at 32-1, they finished second from Post 5. After that race, Day made a gamble with the gelding.

“One night, in his next start at Grand River, Dave was not feeling so great and it was coming up close to race time and the horse was kind of standing there. I harnessed him up for Dave and I said ‘Dave, are you alright?’ And he goes ‘Not feeling so good.’ I had actually just lost my mare LDL Gem the night prior in a claim, so I said to Dave ‘Would you like to come home with me, Herbie?’ And I’m patting him and giving him a bit of love, and Dave just said ‘Do you want to lease him? Do you want to take him?’ I’m like, okay. I literally took him home that night after he raced and the rest is history. I leased him for 12 months and with about two months left on the lease and I said ‘Dave, would you like to sell him?’ Dave named a price and I agreed. That’s how I ended up with him...just right spot, right time.”

In Day’s barn, Sizzlen Hot Herbie was reconfigured with new shoes, a process which Day said took numerous hours to get right. And from that point, the gelding has been a consistent performer for the Australian native who made her first North American starts back in 2012. Under her care alone, he has banked $115,336 in the near three years Day has trained the horse.

“He always wanted to go forward, there was never that problem. He always wanted to go forward no matter what. [We] did a little vet work on him, worked out where the main spots are with him – basically, look at his hocks and that’s all you do. You keep on top of them and make sure they’re nice and good to go and clean, and he’s happy with that...Keep him happy and he’ll give you everything all day long. But if he gets sour, he can be quite sour when he wants to be. A lot of outside time and just a lot of loving and throwing carrots at him.

“There’s only been one other driver that’s driven him for me since I’ve had him in the three years,” Day said. “Without a doubt, the horses know you. When you’re around them 100 percent of the time and you’re driving them and you’re training them and you know everything about them, you know the ins and outs… I mean, I can tell another driver how he likes to be driven best, but there’s nothing like the horse going for you. You just know when you have to pull him. You know when you just sit there and go ‘You know what, not this week’ or ‘I’ve got to make a move before those ones on the front end get too far ahead of me.’ Without a doubt, these horses know you more when you’re hands on like that. They can sense you before you sense them.”

Day had a sense early on that Sizzlen Hot Herbie would be the kind of horse that could keep a smaller operation afloat, and she can't speak highly enough about her stable star.

"From the time I bought him, I always said this horse would be my downpayment for a house. I said it from the word go, even when I leased him. All the money that he earns me, I just keep pocketing it and I'm just waiting for that day that I can buy my first home over here."

Watch Day's full interview in the feature below:

Congratulations Natasha. Great story! I have a feeling Herbie will have a home for life.