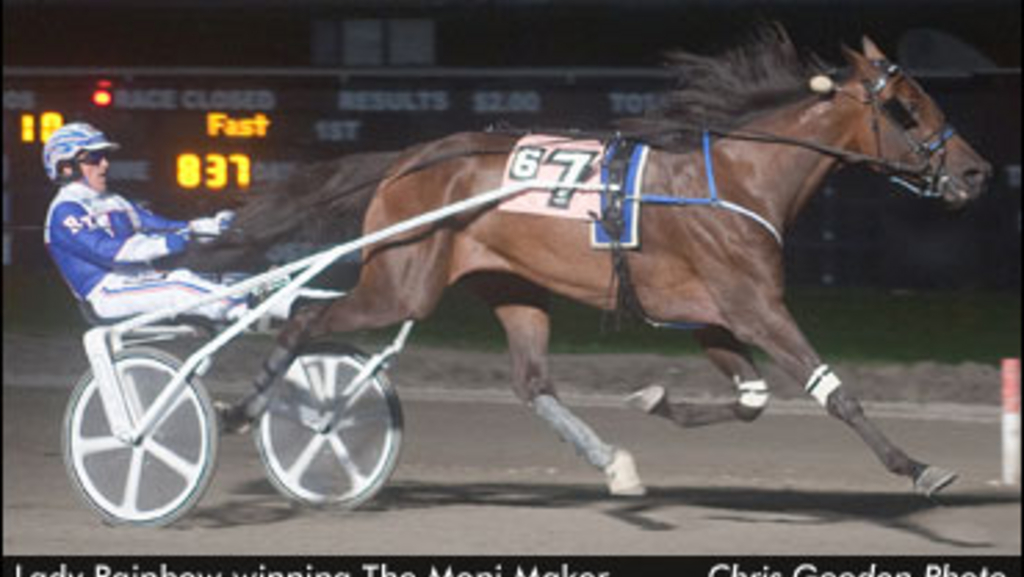 Lady Rainbow and trainer-driver Rick Zeron zipped up the passing lane to win the $233,400 Moni Maker for three-year-old filly trotters in a career-best 1:54.2 at The Meadows on Friday night

Firstclassprincess (Brian Sears) fired to command from the outside post position in front of Lady Rainbow, Caitrin Hall (Eric Ledford) and Beatgoeson Hanover (Dave Miller) while the popular Iron Lady (Dave Palone) made a costly miscue as the wings of the gate folded.

Firstclassprincess was first off the gate, but was quickly overtaken by Lady Rainbow as Zeron motored her to the top during the :28.4 opening quarter. The eventual winner then settled for a pocket ride as Beatgoeson Hanover swept to command as the fillies moved in front of the grandstand for the first time.

Beatgoeson Hanover proceeded to the half in :56.4 and three-quarters in 1:25.2 with Caitrin Hall moving first up. However, once they hit the top of the lane, Lady Rainbow shot up the rail and opened up a three length lead to secure the victory. Beatgoeson Hanover and Firstclassprincess finished second and third.

While the win was Lady Rainbow's first of the season in nine stakes starts, she has not missed a cheque, earning over $520,000 for her connections in 2011. The daughter of Muscles Yankee-Sunshinenlollipops was a runner-up in the Hudson Filly Trot, and her last three starts including the Simcoe Stakes, the American National and the Hambletonian Oaks.

"I haven’t left with her all year because it’s a long year for her,” said Zeron. “She’s been coming from 10 lengths back at the half and not winning any. I was talking to my son Scott, and he said, ‘For goodness sake, when are you ever going to leave with her?’ I said, ‘Tonight. How would that be?’

“I wouldn’t have cared if it were a $4,000 purse. It’s just getting that win. I’m glad she got that monkey off her back,” added the 2010 O'Brien Award winner of Horsemanship.

Lady Rainbow is owned by the Rick Zeron Stables of Oakville, Ont., The Camel Club Stable of Hamilton, Ont., Herbert Chambers of Richmond Hill, Ont., and the Rojan Stables of Wilmington, Delaware.

(With quotes from The Meadows)

Congrats Mr. Zeron, the race replay doesn't tell the WHOLE story. For several years I've witnessed and older gentlemen and his daughter come to the track/racebook on nights when Woodbine/Mohawk is simulcast. The gentlemen never buys a program, only bets Woodbine-Mohawk, and further, only bets Rick Zeron. Whether he's 3/5 or 50-1 you can go to the bank that the gentlemen has bet $2, $4 or $5 to win,place or show on Mr. Zeron. I might add that this gentlemen has been around since the days when Delvin & Max Hempt owned the track. The Meadows employees and management were aware of this gentlemen/fans enthusiasm for Mr. Zeron. They told him if R. Zeron won to head for the winners circle. Well, as the replay shows; AAA couldn't have written a better trip tic for the horse. K. Decker & T. Leasure saw to it that the gentlemen got in the winners circle picture with Mr. Zeron and what appeared to be owner's of the horse. The seen continued for several minutes. Mr. Zeron was introduced to the gentlemen, shook his hand, gave the guy his whip, autograph, they took another picture at the horses head with just the gentlemen, Zeron & groom. Mr. Zeron continued to talk and spend time with the gentlemen while the groom held the horse. This went on for at least 5 - 10 minutes. It was one of the classiest acts I've seen at a racetrack in years. When I saw the man's daughter later, she informed me that it was his 92nd birthday. What a birthday present. He had not come down off of CLOUD 9 three races later. WAY TO GO RICK!!!!!!

Congratulations to Rick Zeron and Bob Coole and all. Winning the Moni Maker is a dream for any 3 yr old filly and her connections, but she did so handily and easy, well done. Rick and Bob have done a wonderful job at managing this special filly and she is showing it on the track.
Coole has so much love and passion for Lady Rainbow and this is the magic to her attitude!

So Rick, it took the advice

So Rick, it took the advice from a youngster (Scott) to finally put Lady Rainbow in the winning circle after nine starts. Didn’t you know that, these days, ‘The young rule the world’! Congratulations to all! Lache pas la patate! ZZZZZ

How does a horse like Lady Rainbow go off at 3-1? Free money to all bettors! Congrats to Rick, caretaker Bobby Coole and all the connections.

Congrats to Lady Rainbow and

Congrats to Lady Rainbow and all the connections. Great race...and a special shout out to Bobby Coole her caretaker made sure she was like a brand new diesel engine when Ricky stepped on the gas tonight...See u all soon

Congrats! Great race!Lady Rainbow is one special horse.See you soon.