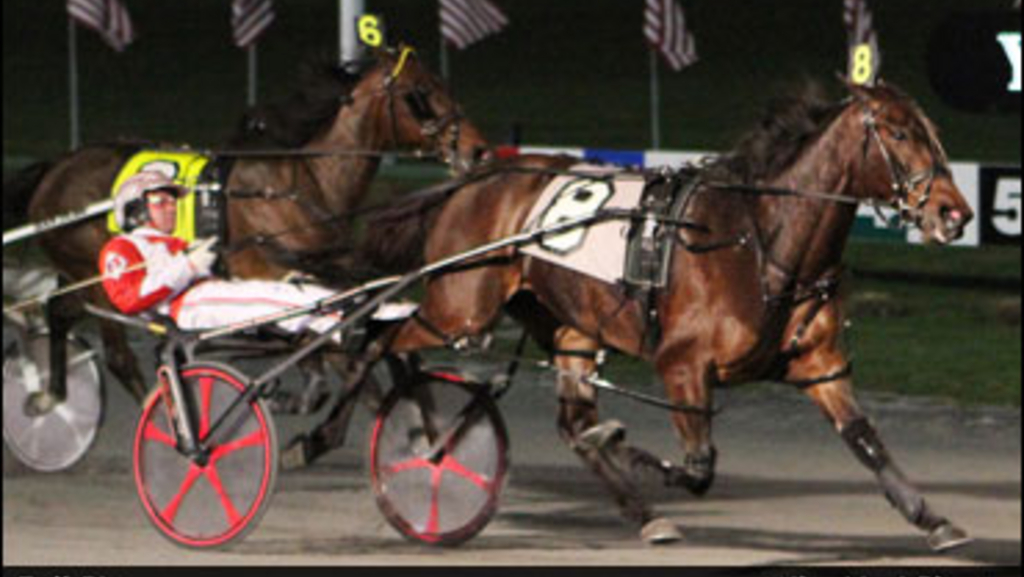 Full Picture (Jason Bartlett) did something her main rival could not Friday night...negotiate the first turn

That's the Reader's Digest version of Yonkers Raceway's $66,000 final of the Petticoat Pacing Series for three- and four-year-old fillies and mares.

Leaving from outside post position No. 6 (in a very beneficial two places after a pair of inside defections), Full Picture had her nose on gate.

While "Lorrie" left the course, Full Picture was left to her own devices. She strolled through insanely-soft even early fractions of :29 and :58, before picking up the pace down the backside. A :28.2 third quarter (1:26.2) led to a two-and-a-half-length advantage turning for home.

For Full Picture, a four-year-old daughter of Artsplace owned by Marvin Rounick and trained by Jerry Silverman, she returned $4 as the second choice for her third win in four seasonal starts. The exacta paid $41.80, with the triple returning $208.50.

Bartlett, who'd driven both Full Picture and Lorrie Please in each of their respective series starts--and who had made his choice before Full Picture drew what was to be an eight-hole--wanted to test "Lorrie" right from the start.

"She's a very talented filly, but there were times when I almost lost her in the turns," he said. "Not that I knew she'd make a break here, I just wanted to make sure I was able to get away no worse than second.

"Full Picture is better sitting on a helmet, and I would have been happy chasing the other horse, but once that one broke, I was able to control the race.

"She goes about her job like she's supposed to. Sometimes, like tonight, she waits on other horses, but she was very good."

Full Picture is actually eligible to the Blue Chip Matchmaker, and may join those lasses next week.

Defending champ Ginger And Fred (Gingras) strolled at 3-10 in the opening event, effortlessly disposing of six rivals in 1:53.3.

Leaving from post No. 2, she quarter-moved (:28.2), then waltzed (:57.4 half; 1:25.3 three-quarters) in a race sans arch enemy Chancey Lady, who was a judges' scratch. Shanghai Lil (Dave Miller) was a first-up second in her series debut, beaten two and a half lengths. Giveittoemstaight (Brennan), Omen Hanover (Pantaleano) and Only The World (Pierce) completed the cashers.

The second Matchmaker grouping was won by Symphony In Motion (Jeff Gregory, $8.40) in 1:53.3. Leaving from post No,. 4, the second choice sat a very loose pocket to 4-5 fave Tomorrowpan (Miller).

That one could "run," (:27.3; :57.1; 1:25.1) but she couldn't hide, coming back to her foes in and out of the final turn. Symphony In Motion ducked inside, prevailing by a half-length over a stubborn Rev Me Up (Gingras). Tomorrowpan faded to third, with Flirtiscape (Brennan) and Farmers Tuition (Manzi) picking off the remainder.

For Symphony In Motion, a seven-year-old daughter of Bettors Delight trained by Mark Harder for co-owners Joseph Jannuzzelli and Carol Demarch, it was her second win in 10 '11 tries. The exacta paid $64, with the triple returning $219.50.

The third Matchmaker get-together--a quintet when Ms. Inside (Ticket To Rock) and Ms. Outside (On The Glass) both came up ill--found Anndrovette (Bartlett, $3) offering minimal suspense. In play from what became post No. 4, the 1-2 fave worked around Twin B Tiara (Pantaleano), putting up intervals of :27.4, :56.4, 1:25 and 1:53.2. All Spirit (Brennan) was the best of the rest--beaten two and a half lengths--with Park Avenue (Eric Goodell), Jasperthat A (Manzi) and Twin B Tiara rounded out the order and the payees.

For Anndrovette, a four-year-old daughter of Riverboat King co-owned by trainer Mark Kesmodel, Jeffrey Bamond and Joseph Davino, she's now two-for-three in 2011. The exacta paid $19.40, with the triple cancelled.

Friday night's final Matchmaker event saw Breakheart Pass (Gingras) author a 22-1 rank-outsider, two-move effort. Grabbing an early four-hole from post No. 6, she watched Run On Luck (Miller) leave over 3-4 choice Save My Shark (Pantaleano). The former led through weigh stations of :27.3 and :56, but was powerless when Breakheart Pass came to play right at the 1:25 three-quarters.

That one eventually held off the lass on her back, Hulas Z Tam (Pat Lachance) safe by a half-length in 1:53.1. Series-debuting Shacked Up (Goodell), Up Front Kellie Joe (Brennan) and a trapped Save My Shark grabbed the small change.

For Breakheart Pass, a seven-year-old daughter of Western Hero trained by Ron Burke for co-owners Burke Racing and Weaver Bruscemi, she returned
$47.60 (seventh choice) for her second win in 10 seasonal starts. The exacta paid $646, with the triple returning $2,613.