Timon AS Triumphs In Pompano Open 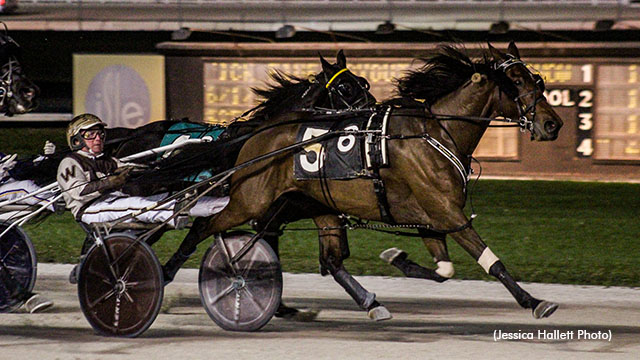 The now six-year-old gelded son of Lionhunter, trained by Melanie Wrenn for owner Michael Guest, well back early, roared into contention on the backstretch, kept gnawing away at the leader looking for the "kill" and, finally, held off another arch rival looking for the same bounty.

Flagman was fourth in the mile while Celebrity Pegasus earned the final award in the million-dollar, classy sextet.

At the outset, Flagman and Max both went surging for the lead with the latter out-footing the former through an opener of :27.3 with The Lionking AS settling in third, Celebrity Pegasus fourth and Timon AS next, about two lengths better than Toys For You.

Positions remained unchanged through a :57 half and that's where things started to heat up as Timon AS and Toys For You went brushing forward, going first and second-up as the others remained sitting chilly inside.

As the pace quickened through a :28.4 third panel, Max continued to lead with Timon AS looming boldly and Toys For You right behind ready to surge widest of all.

In the lane, Timon AS tenaciously stuck his head in front a sixteenth out and held off Toys For You by a half-length.

"He (Timon AS) went a big mile alright," said driver Peter Wrenn after the race. "You know, he's still a little green, even though he's got a good number of races under his belt, and he's a bit tricky to drive, but he's very fast and strong. These are a bunch of very good horses and post positions probably made the difference here. After all, we drew one post better than Rick (Plano's Toys For You). That's a length at the start and we won by less than that!"

The $12,600 Open II Trot went to Just Maybe The One, driven by Kevin Wallis for trainer Tee Wine and The Wine Stable.

The seven-year-old altered son of Donato Hanover, blasted off the wings, opening up a five-length lead around the opening turn and carded fractions of :27.2, :56 and 1:24.4 to coast home a 2-3/4-length winner in 1:54.4 over Four Wheelin (Wally Hennessey), with Cash Hit (Dave Ingraham) next. Sooo Handsome was fourth while Wild And Crazy Guy finished fifth after recovering from a miscue at the start.

The $11,000 Open III Trot went to Anchors Away, driven by Braxten Boyd.

The five-year-old gelded son of Whom Shall I Fear took charge a few strides after a :27.3 opening panel and went on to clock subsequent numbers of :57.1 and a picked-up 1:25 while repelling a bid and edged clear thereafter to score in 1:54.4 over Keegan Ho (Fern Paquet Jr.), with Keystone Apache (Hennessey) next. Mr Houdini and Noble Legend finished four-five in the octet.

Trained by Mike Deters, who co-owns with Joel Warner, Anchors Away returned $4.80 to his many faithful.

Also of note, the 14-year-old ageless warrior Cantab Lindy vaulted his lifetime earnings over the $700,000 mark by winning for the 61st time in a storied career measuring 261 starts.

Owned and trained by Brent Davis, Cantab Lindy, a gelded son of Cantab Hall, was driven by John MacDonald and stopped the timer in 1:55.4. He was 6-5 on the board and paid $4.60 to win.

Finally, catching up on Florida Amateur Driving Club action, drivers Jamie Marra and Tony Dinges used their inside posts to perfection in scoring wins with BJAnthony and For A Dreamer, respectively.

Marra was in the bike in Sunday's FADC event for owner/trainer Dustin Ingraham and pulled around turn two with his charge, sending BJAnthony to the top on the backside, going on to score in 1:58.3 over The Big Muscle (Joe Pennacchio), with Manwilling (John Campagnuolo) third.

On Monday, Dinges brushed For A Dreamer from sixth after the half and, after a double-bubble backside binge to the front, went on to score a win measuring 2-1/4 lengths in 1:58 for trainer and owner Dustin Ingraham. Keystone Blade (Joe Pennacchio) finished second while Little Big Rigs (Brian Calvert) was next.

For A Dreamer, a seven-year-old altered son of Cantab Hall, has 18 career wins and $242,929 on his card. Dinges trains For A Dreamer for owner Mason Shaw. As second choice, the winner paid $8.20.

The Florida Amateur Driving Club is comprised of over 50 members who donated all of their earnings from driving for distribution to worthy charitable causes from Make-A-Wish to horse rescue organizations, which have benefited to the tune of over $220,000 since their inception.

Racing continues on Tuesday with a $15,000 guaranteed pool on the popular Pick-4 (industry low 12 per cent takeout) and a carryover in the Super Hi-5 finale. Post time is set for 7:20 p.m.