With Shabby Chic off stride at the start, Corey Callahan worked Odds On Surfer Gal around Bank The Win and Gaitway Gal to assume the lead at the end of a :27.4 first quarter, only to yield for a pocket ride behind Bank The Win — the 5-2 second choice — with a lap to go. Odds On Surfer Gal stayed tight to the pacesetter through middle splits of :57.1 and 1:25.4 and found herself poised to attack after Bank The Win shrugged off a first-over challenge from Gaitway Gal into the far turn. Off the home turn, Victor Kirby called on Bank The Win for every last bit of energy she could muster, but Odds On Surfer Gal surged to the fore up the open stretch, reaching the lead in the final 70 yards of her 1:54.3 score. Gaitway Gal re-rallied in mid-stretch for second, a neck behind; Bank The Win was a beaten third. 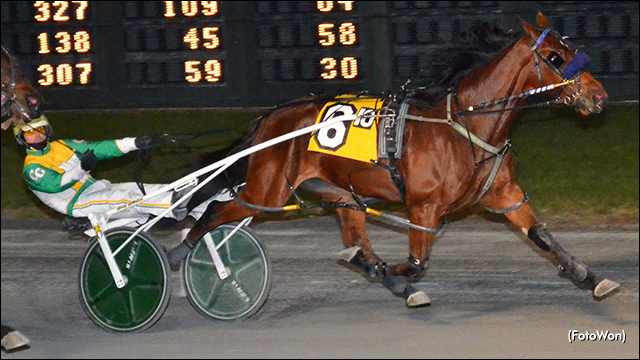 Tony Alagna trains Odds On Surfer Gal — now a two-time winner with $62,400 in earnings — for Odds On Racing. Odds On Nourrir bred the Badlands Hanover-Odds On Moinet filly.

In the $15,000 Michael T. Scuse DSBF consolation for rookie pacing fillies, Tahoe ($10.00) vaulted from the pocket to win for the first time since her career debut, taking a mark of 1:57.4 in the act.

Following fourth-place finishes in both of her preliminary divisions, Tahoe and driver Art Stafford Jr. left from post 3 to secure the pocket behind 6-5 pacesetter Donnas The Best and draft through early splits of :28 and :58.4. With five-sixteenths to go, Stafford angled the daughter of Badlands Hanover and Veronica Lake off the pegs, worked to within a half length of Donnas The Best past three-quarters in 1:28.1 and sprinted clear with ease through the far turn. Tahoe finished the mile 4-1/4 lengths better than 22-1 long shot Clean Up Hitter, who circled three-wide through the final turn to edge Toodles Power for runner-up honours.

Michael Hall trains the Doc's Farm-bred Tahoe for Eric Cherry's Let It Ride Stables, who has moved He's Watching to the First State for the 2022 breeding season.