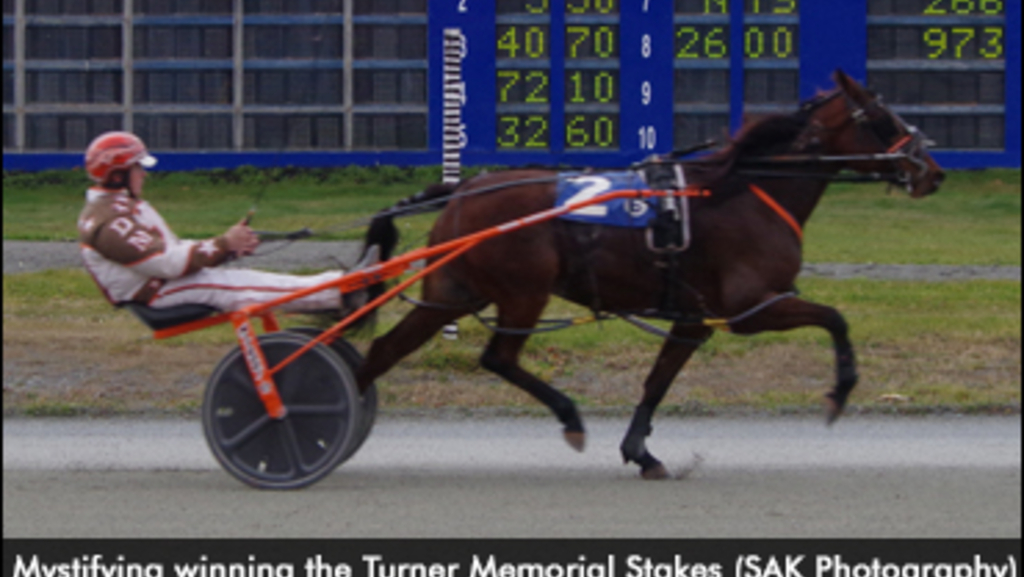 Mystifying, Canada's winningest three-year-old pacer so far this year, added another victory to her 2021 campaign in the Donnie & George Turner Memorial Stakes featured on Sunday afternoon (Nov. 14) at Truro Raceway.

Mystifying notched her 13th win of the season in the $16,112 filly division for trainer/driver Darryl MacLean, who also co-owns with Gordon MacLean of Winsloe, P.E.I., and Stephen Downey of Quispamsis, N.B.

After a troubled start for insider Havarti (Paul Langille), 8-5 second choice Mystifying secured the lead from post two with the favoured Tobins Brownie (David Dowling) in the two-hole for opening fractions of :28.4 and :59.3.

Meanwhile, Woodmere Leah (Darren Crowe) began to advance from the backfield, making her way up to second-place and a just neck off the pacesetter by three-quarters in 1:30.2. However, she dropped back to third off the final turn as Mystifying powered away to a 1-3/4-length victory in 1:58.3 over the off track, with Tobins Brownie finishing second.

Mystifying paid $5.50 to win. The Source Of Pride-Dreaming filly has earned more than $75,000 through 19 starts this year, with only a pair of off-the-board finishes. The victory was her 16th lifetime.

Three-year-old pacing colts and geldings faced off in a pair of $7,806 divisions, with the favourites going down to defeat.

Leaving outside his four rivals, Atlantic Breeders Crown champion Woodmere Stealdeal (Clare MacDonald) progressed to the lead through a 28-second opening quarter and carved out middle splits of :58.1 and 1:26.3 before the pocket-pulling Woodmere Alvin went by down the stretch. The favourite settled for second, finishing 1-1/2 length behind while Whistler (Jason Hughes) followed in third.

The victory was considered an upset despite Woodmere Alvin's 3-1 odds and the gelding returned $8.70 to win. Owned by Mike Pollard of Stratford, P.E.I., the son of Rollwithitharry out of Alittleeastermagic earned his fourth win this year to go along with 10 other top three finishes from 22 starts and is closing in on $30,000 for the season.

Jadensmagicsteel later defeated 4-5 co-favourites Rotten Ronnie and Bettin Again in the second division, with Adam Merner working out the winning trip aboard the Melissa Rennie trainee.

Jadensmagicsteel launched first-up from fourth after early fractions of :29 and :59, taking command from early leader Bettim Again (Darren Crowe) as the field moved into the backstretch. He then opened up five lengths on the way to three-quarters in 1:27.4 with Rotten Ronnie (Redmond Doucet) taking over second-place and closing within 1-3/4 lengths behind at the wire in 1:57. Elliot Moose (Jason Hughes) finished third while Bettim Again completed the race a distant fifth.

Jadensmagicsteel returned $13.90 to win as the 6-1 third choice. The Stealhead-Meridian Magic gelding now has seven wins from 19 starts with nearly $40,000 in earnings this year for Boys Will Be Boys Racing of Charlottetown, P.E.I.

This week's top $2,000 Winners Over pacing class was won by even-money favourite Little Manny, who looped early leader Good Friday Three in front of the grandstand and drew off for a new lifetime mark of 1:54.3 in rein to Stephen Trites. Good Friday Three (Andrew Campbell) stayed for second with Intended Royalty (Redmond Doucet) holding on for third ahead of a three-wide Imalookertoo (Clare MacDonald).

The four-year-old Articulator gelding, who knocked two seconds off his mark while earning his ninth win this year and 14th overall, is trained by Charlies Miles and owned by Trites in partnership with fellow New Brunswick residents Dean McLaughlin, Brad McLaughlin and Mark Taylor.