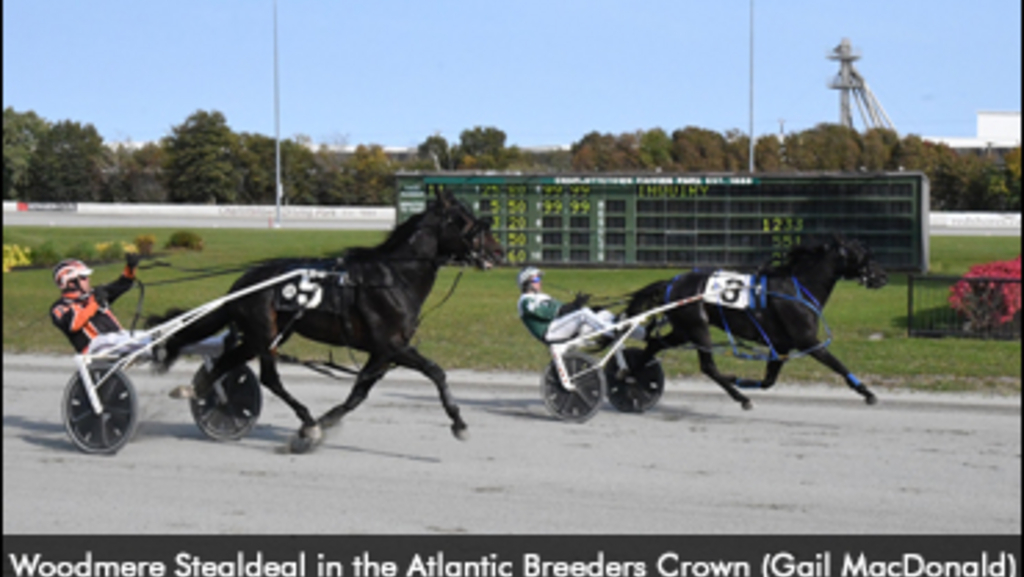 Woodmere Stealdeal capped off the Weekend of Champion defending his Atlantic Breeders Crown title on Sunday afternoon (Oct. 10) at Red Shores Racetrack and Casino at the Charlottetown Driving Park.

Woodmere Stealdeal guarded the front with every stride in the $25,000 Atlantic Breeders Crown three-year-old pacing colt final, presented by Cavendish Farms, on his way to a 1:53 victory for his 20th lifetime win. Marc Campbell was in the race bike for the victory with Danny Romo handling the training duties of the son of Steelhead Hanover for owners Kevin Dorey, Robert Sumarah, Glenn MacDonald and Frank Brundle. Rotten Ronnie (driven by Redmond Doucet) closed strong to finish second ahead of Elliot Moose (Jason Hughes).

Boo Yaya came first-over to win the Atlantic Breeders Crown for two-year-old pacing fillies as she prevailed in 1:57.2 by 1-1/4 lengths in the $25,000 event. Campbell was in the seat for trainer Robert MacLeod and owners Hugh and Ali MacEachern. Woodmere Jazz (Dowling) sat in the two-hole and finished second with Therealprincess (Corey MacPherson) closing for third.

The $25,000 Atlantic Breeders Crown two-year-old pacing colt final had an eventful start as heavy favourite Fern Hill General (Brodie MacPhee) and Alldawaytocardigan (Myles Heffernan Sr.) hooked wheels in the first turn. Heffernan was unseated from the race bike and the horse did not finish the race. Stash It Away(MacPherson) took advantage of the confusion and advanced to victory in 1:56.1 ahead of Soul Assassin (Dowling) and Brumby (Adam Merner). Kevin MacLean trains Stash It Away for owner Reg MacPherson.

The final part of a Campbell driving quadruple had Time To Dance cruise to a 1:52.1 win in the $8,000 Atlantic Breeders Crown Invitational Pace from his own stable for owners Brent Campbell and Matt McDonald.