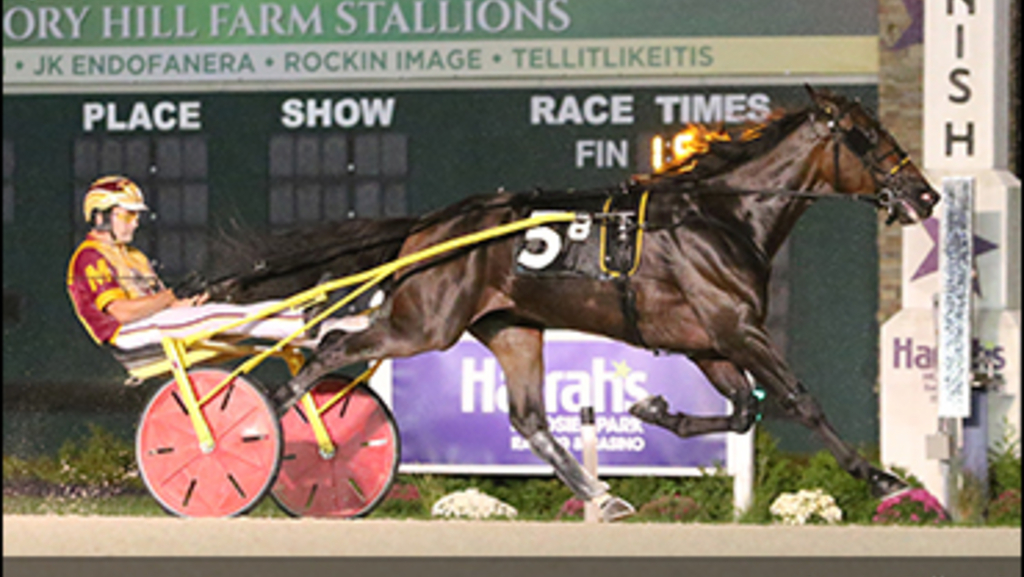 M Ms Dream looked every bit the part of a 6-5 favourite as she coasted to a 1:56 victory over Jusmakinyalook in the opening $65,000 division for two-year-old trotting fillies. Sam Widger moved M Ms Dream to the lead up the backside and trotted a :27.3 closing quarter to hold off all challengers. The daughter of Swan For All and Trading Places recorded her fifth win from seven starts this season for trainer Henry Graber and the partnership of Eleven Star Stables, Frank Baldachino and Hillside Stables.

In the second division for two-year-old trotting fillies, Fleurie turned in an impressive effort of her own to score as the heavy favourite in a new lifetime best of 1:55.1 with Peter Wrenn in the bike. Switching up her tactics from previous starts, Fleurie opted for a trip off the pace, yet still won by nearly four lengths. Trained by Melanie Wrenn, the M T Pockets Stables' homebred daughter of Muscle Massive and Renees Pocket recorded her fifth win of the season from seven starts.

Heavy favourites prevailed in both divisions for rookie trotting colts. After racing in the Mohawk Million, Dover In Motion returned to Indiana and posted a 1:54.2 gate-to-wire score. With Ricky Macomber Jr. in the bike, Dover In Motion went to the front and never looked back en route to a 4-1/4-length victory over Yo Mister (James Yoder). The gelded son of Dover Dan and Keystone Sadie recorded his seventh win from eight starts for trainer Jamie Macomber and owners M&M Racing and Norbert Maza.

Ponda Adventure and Trace Tetrick captured the second male trotting division in 1:54.4, going to the front from post seven and repelling a late surge from Head Games (LeWayne Miller) to notch his eighth win of the season from nine starts. The Erv Miller-trained Swan For All—Wildflower gelding pushed his seasonal earnings over the $200,000 mark for the Engel Stable, Louis Willinger and Jerry Graham.

Lorraine Smoke and James Yoder pulled a minor 4-1 upset in the first split for rookie pacing fillies, storming home off cover in :26.4 to score in 1:52.4 over a sloppy track. The JK Endofanera-Rebid filly has now won two of 12 lifetime starts for Cheyenne and James Yoder.

In the final division, Always Gonna B You scored her second straight Indiana Sires Stakes win for trainer Jeff Cullipher and driver John DeLong, finding late racing room up the inside to score in a lifetime best of 1:51.1. Val D’Or Farms owns the Always A Virgin-Passing Fancy filly in partnership with breeder Roll The Dice Stable.

Live racing and Indiana Sires Stakes action will continue at Harrah’s Hoosier Park on Thursday (Oct. 7) with a 14-race card starting at 6:30 p.m.