Dover In Motion turned in another dominant performance at Harrah’s Hoosier Park Racing & Casino on Wednesday, Sept. 15 as the two-year-old trotting colt sensation continued his winning ways in the co-featured event of the evening, a $66,000 split of the Indiana Sires Stakes.

Divisional heavyweights Dover In Motion and Ponda Adventure lined up behind the gate together for the first time season—both with an undefeated streak on the line. With regular pilot Ricky Macomber Jr. in the bike, Dover In Motion grabbed the lead down the backside and was able to hold off the pocket-sitting Ponda Adventure and Trace Tetrick to get the win in 1:54.2.

Leaving from post three in the field of eight, Dover In Motion settled along the rail in fourth while Ponda Adventure and Tetrick stepped out with the wings of the gate to grab the early lead. Macomber Jr. gave Dover In Motion the green light down the backside and he quickly ranged up to take command at the half in :57.3.

Reaching the three-quarters in 1:27, Dover In Motion was on top with an ever-increasing lead. Using a :27.2 closing kick, Dover In Motion finished under a hand drive from Macomber Jr. and was 2-3/4 lengths to the good. Ponda Adventure was second while Racer Dan and James Yoder rounded out the trifecta. 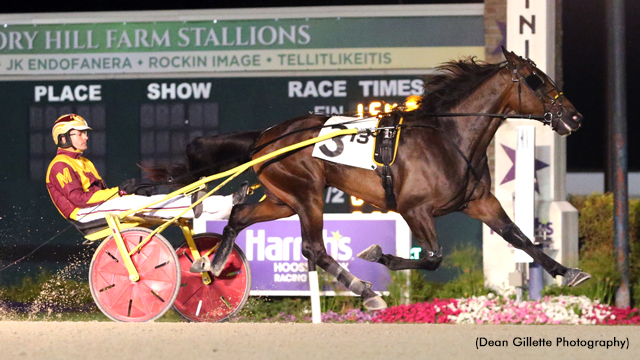 Sent off as the heavy betting favourite, Dover In Motion returned $3.20 to his backers at the betting windows.

The gelded son of Dover Dan—Keystone Sadie is now a perfect six-for-six this season. Owned by M&M Racing and Norbert Joseph Maza, Dover In Motion has now amassed $144,000 in lifetime purse earnings. Dover In Motion was bred in Indiana by Lyle Dean Slabach.

Yo Mister and driver/trainer James Yoder were victorious in the opening division of the stakes for two-year-old trotting colts and geldings. Stopping the timer in 1:55.2, Yo Mister turned a pocket trip into his third victory of the season. The 1:55.2 clocking was a new lifetime best for the son of Dover Dan—My Lady Lindy. Yo Mister is owned by Verlin Yoder and was bred by Noah Wickey and Amos Schwartz.

Two divisions for the two-year-old trotting fillies were also featured on the evening’s 14-race card. Jusmakinyalook and Jordan Ross staged a big rally late in the lane to pull the 11-1 upset in the opening division. Stopping the timer in 1:55.2, the Robert Taylor trainee scored her second lifetime victory and established a new lifetime best. The daughter of Pinetucky—Beldame Hanover tracked down her stablemate Luv Lorelei and Robert Taylor to get the win. Jusmakinyalook is owned by Devon Miller.

The second division was captured by M Ms Dream and driver Sam Widger for trainer Henry Graber Jr. M Ms Dream employed a :27.3 final quarter to get the win by four lengths in a new lifetime best of 1:55.4. The daughter of Swan For All—Trading Places is owned in partnership by Eleven Star Stables, Frank Baldachino and Hillside Stables and has now won four of six lifetime starts.