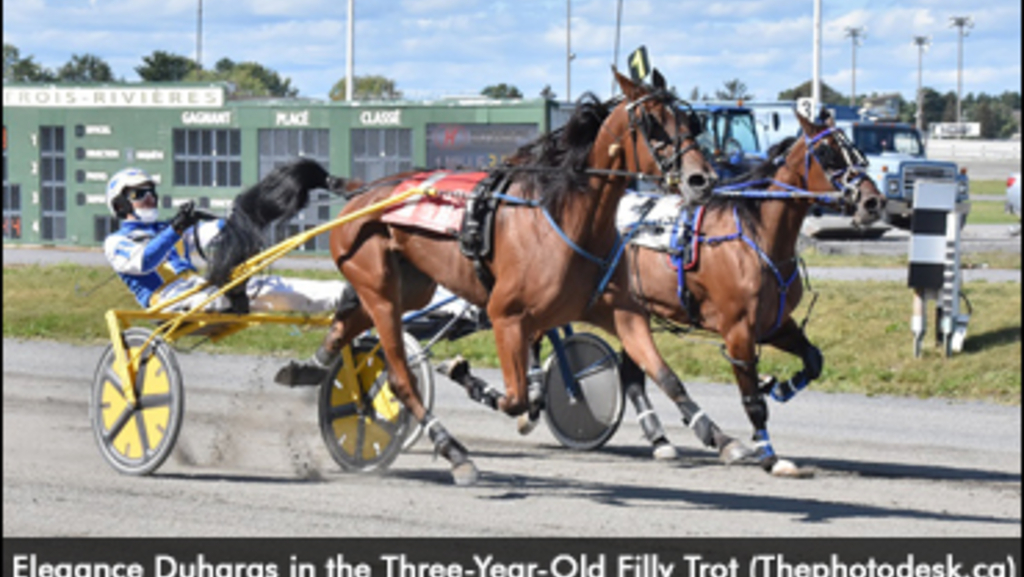 It was a beautiful, sunny afternoon at the Hippodrome 3R on Sunday (Sept. 12) for the $470,000 Super Sunday finals of both the Breeders Trophy Series for three-year-olds and the Future Stars Series for the two-year-olds.

The rich race card and sunny weather also brought out the biggest crowd to the races since COVID-19 closed off spectators coming to the track in 2020.

And driver Louis-Philippe Roy put on a show for the race fans as he won five of the eight Quebec-Bred finals.

X O X O had been perfect in the Breeders Trophy Series until today’s final.

Race favourite Elegance Duharas (Louis-Philippe Roy) took the two-hole spot and followed Mag N Lady to the half-mile in 1:01.1 and then the three-quarters in 1:31.2 with Mag N Lady holding a two-length advantage.

As those two came down the stretch, Mag N Lady began to tire and Elegance Duharas, under a drive by Roy, was able to catch Mag N Lady before the wire to win by a half-length in 2:02. Tuscans Beauty (Stephane Brosseau) was third. 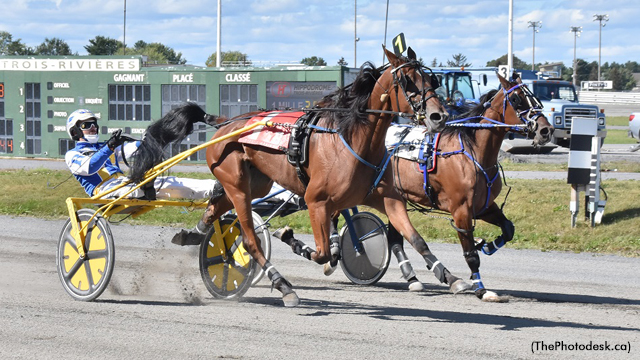 A filly sired by Muscle Mass, Elegance Duharas posted her second win of the season from seven starts for trainer Denis Gueriel and paid $3.50 to win. She is bred and owned by Haras De L Estrie, Inc. of Dunham, Que.

Both of the race favourites, Emotions Riches (Stephan Gendron) and Hall Win (Louis-Philippe Roy) left sharply for the lead with Emotions Riches maintaining control of the lead to a quick opening quarter of :27.3.

The top two pulled away from the field as Emotions Riches led to the half-mile in :59.1. Then before the three-quarters in 1:29.3, Roy pulled from the pocket and sent Hall Win after Emotions Riches. Those two went head-to-head around the final turn and down the stretch until Hall Win wore the leader down and won by 1-1/4 lengths in 2:01. Wishful Glide (Jerome Lombart) was third.

Hall Win ($5.90) notched his sixth win of the year from 10 starts for trainer Kevin Maguire. The colt by Angus Hall was bred and is owned by Ecuries Maguire Inc. of Sainte-Marie, Que.

Louis-Philippe Roy and Got Sexy Scars ($3) was first on the lead ahead of Platine Alpha (Pascal Berube) to the first quarter in :27.3 and was immediately challenged on the outside by Celia Bayama (Sylvain Filion), who was the 2020 Quebec-Bred champion.

Filion and Celia Bayama pressed Roy and Got Sexy Scars to the half-mile in :56.1 and stayed strong on the outside as they passed the three-quarters in 1:25.3.

In the stretch, Got Sexy Scars continued to hold off Celia Bayama, winning by 1-1/2 lengths in 1:57. Platine Alpha was third.

Sired by Sportswriter, Got Sexy Scars earned her third win this season from 11 starts. She is trained by Richard Moreau for owner/breeder Bruno Lepage of Beauharnois, Que.

After a wild half-mile start to the race, Cadillac Bayama ($3.80) and driver Sylvain Filion crushed the field and set a track and stakes record with a six-length romp in 1:52.3.

The race started off with YS Do It Right (Louis-Philippe Roy) going to the quick lead by the first quarter in :26.3. Then right before the half-mile in :55, Colonel Bayama (Justin Filion) came first-over with Cadillac Bayama following the live cover, but that was not good enough for Sylvain Filion and he took Cadillac Bayama three-wide around the turn, clearing to the lead by the backstretch.

From there, Cadillac Bayama tore away from the field, leading by 4-1/2 lengths at the three-quarters in 1:22.4 before sailing home an easy winner by six lengths. The Light Speed (Guy Gagnon) was second with Chantee (Stephane Gendron) third.

The time bested the previous track record for three-year-old male pacers of 1:52.4 set by Duc Dorleans in the 2013 Quebec-Bred Championship and Ashleysbest in 2019. 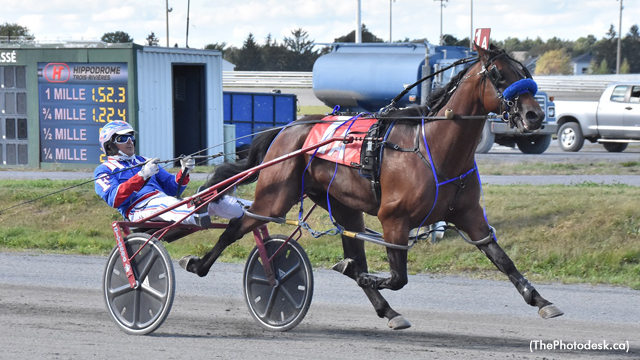 It was a lifetime mark for Cadillac Bayama and the fourth win this year from eight starts. Yves Filion trains the homebred Sunshine Beach colt owned by his Bayama Farms of Saint-Andre-D’Argenteuil, Que.

With the 4-5 race favourite HP Felicity (Sylvain Filion) going off-stride trying for the early lead, the lead belonged to Stella Alpha ($6.30) and driver Pascal Berube, who sped to the opening quarter in :29.2 with Cleveland Moneyka (Stephane Brosseau) sitting second, seven lengths behind. The rest of the six horses in the race made breaks and were out of the hunt.

Stella Alpha led through fractions of 1:00.3 and 1:31.1 before pulling away again from Cleveland Moneyka to win in a romp by 7-3/4 lengths in 2:01. Cleveland Moneyka was second with Lune Duharas (Louis-Philippe Roy) well back in third. 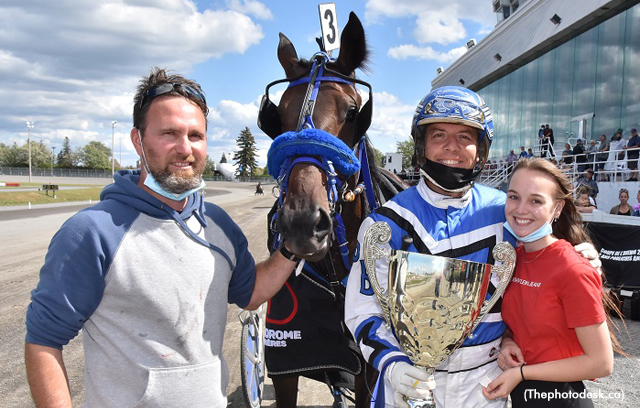 The time of the mile was a lifetime mark and a stakes record for Stella Alpha, a daughter of Royalty For Life with wins in half of her eight starts. She is trained by Sylvain Tremblay and was bred and is owned by his Ecurie Alpha of Metabetchouan, Que.

Royalty Beer ($2.10) made it a clean sweep of the Future Stars Series, winning all three preliminary rounds and was much the best in the final.

Leaving from post five, driver Louis-Philippe Roy sent Royalty Beer to the lead and was up by four lengths by the opening quarter-mile in :30.2. Roy then backed down the pace, going to the half-mile in 1:03.1. Kenogami Rebel (Stephane Brosseau) closed up the gap to be second, but in the backstretch Cleveland Massimo (Samuel Fillion) came first-over and dropped into second place behind his stablemate at the three-quarters in 1:34.1.

The win was the fourth straight for Royalty Beer, a five-time starter. Jean Francois Maguire trains and co-owns the gelded son of Royalty For Life with breeder Ecuries Maguire Inc., Sainte-Marie, Que.

Sunjet Ray ($2.10) and driver Louis-Philippe Roy were the overwhelming 1-9 favourites and raced like it. Leaving hard at the start, Sunjet Ray was up by 5-1/2 lengths by the opening quarter in :27.4. They backed it down to the half-mile in :58.4 as HP Mary Sunshine (Pascal Berube) took the pocket trip.

In the backstretch, D Gs Shallow (Jonathan Lachance) came first-over and pressed Sunjet Ray to the three-quarters in 1:29.1.

Coming down the stretch, Sunjet Ray was able to hold off D Gs Shallow to win by one length in 2:00.2, with HP Mary Sunshine third.

The time was a lifetime mark for Sunjet Ray, who is now three-for-four. The Sunshine Beach filly is trained and co-owned by Francis Richard along with Quebec partners Guillaume Desrochers of Warwick, Dr. John Bradbury of Cookshire-Eaton and Charles Marquis of St Michel Bellechasse.

HP Momentum ($5.20) picked the perfect time to win for the first time in his young career.

Leaving from post six for driver Sylvain Filion, HP Momentum was stretched out to the opening quarter-mile in :28.3 by Aladdin Du Lac (Louis-Philippe Roy). HP Momentum then led the field past the half-mile in :58.2 as Kaporal (Stephane Gendron) came first-over with Y S Mathis Bro (Jonathan Lachance) following second-over.

In the backstretch, Lachance took Y S Mathis Bro three-wide and pushed the leader to the three-quarters in 1:27.4 but was unable to clear so they raced three-wide around the final turn.

In the stretch, HP Momentum kicked in another gear and pulled away to win by two lengths in 1:57.3. Y S Mathis Bro was a game second-place finisher with Aladid Du Lac third.

It was the maiden victory for HP Momentum in his eighth lifetime start. The gelded son of Control The Moment is trained by Jean Tourigny, who co-owns with Claude Hamel of Ayer's Cliff, Que., and Gestion A&A Belanger Inc. of Shawinigan, Que. Hamel bred the colt with Celine Paquin.

Former Quebec-Bred champion Eclat De Rire ($3.40) and driver Stephane Gendron were able to lead from start to finish for a 1:55.1 three-quarter length triumph over a very determined and first-over effort by D Gs De Vito (Jonathan Lachance), who is also a former Quebec champion. Dreydl Hanover (Pascal Berube) was third.

The win was the third of the season from five starts for Eclat De Rire, a four-year-old gelded son of Leader Bayama, trained by Maxime Velaye for breeder/owner Guy Corbeil of Mirabel, Que.

Four-time Quebec-bred champion Capteur De Reve ($3.60) was at his best. Handicapped with post seven, driver Stephane Gendron sent the seven-year-old Muscle Mass gelding out to the lead and they never looked back.

Cutting fractions of :28, :59.2 and 1:28.3, Capteur De Reve put away the first-over challenge from Magic Night (Samuel Fillion) and pulled away in the stretch to win by 3-1/4 lengths in 1:58.4. Magic Night was second with former Quebec-Bred champion Babidibou (Sylvain Filion) third.

The win was the third straight and fifth of the season from nine starts for Capteur De Reve, who is trained by Maxime Velaye for owner/breeder Ecurie Provoquante of Mirabel, Que.

Track Notes: Following up on LPR’s five wins was Stephane Gendron with three wins and Sylvain Filion with two wins. Maxime Velaye led all trainers with three winners from his stable. Live racing resumes at H3R next Sunday, Sept. 19 with first-race post time at 12:10 p.m.