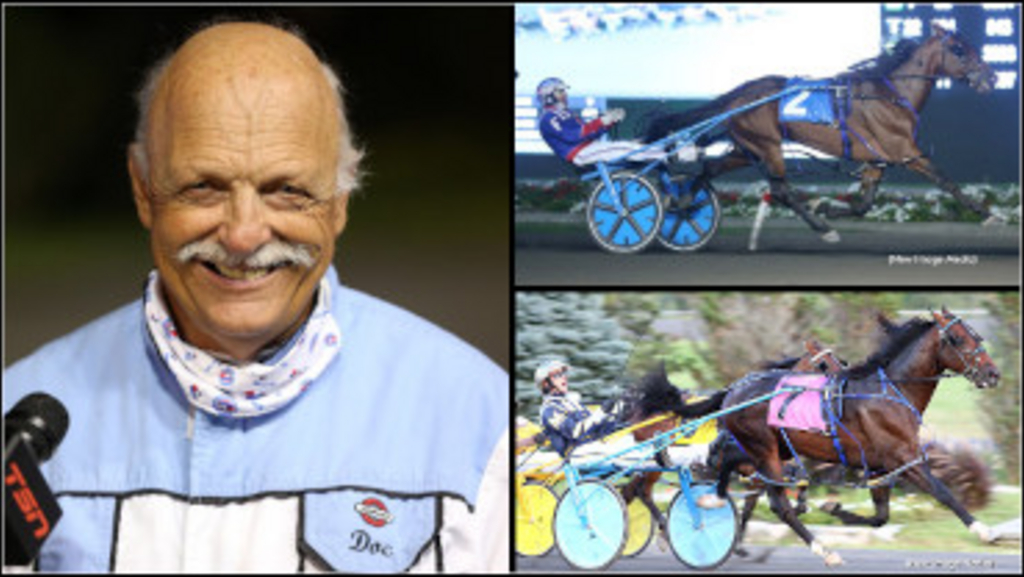 As a number of Canadian-based horses and participants are making plans to race in various stateside jurisdictions, two O'Brien Award winners that were slated to return to Canada after training down in Florida will be heading north — but not back home to Canada just yet.

Dr. Ian Moore told Trot Insider that 2020 Somebeachsomewhere Horse of the Year Century Farroh and 2020 Two-Year-Old Male Pacer of the Year Lawless Shadow will be headed to Ohio after logging their final prep miles — against each other — on Friday (April 23) at the Southern Oaks Training Center. Century Farroh (Dale Spence) cut fractions of :27.1, :54.3 and 1:22.3 with Lawless Shadow right on his helmet. Lawless Shadow paced home with a :28.1 final quarter to comfortably pace by his accomplished stablemate and trip the timer in a sharp lifetime best 1:51 — one of the fastest miles in the history of Southern Oaks. Moore was very pleased with Lawless Shadow while not being concerned that Century Farroh was bested:

"They're both ready to roll. Lawless was super good and I'm really excited about him. I'm just so disappointed that we can't go home and race.... I just can't wait, but it's a shame that I have to do what I have to do.

"When you look at the past two years, [Century Farroh's] qualifiers ... Casimir Richie P beat him last year here in a qualifier," Moore continued. "He's never been good in qualifiers. When he sees the starting gate at a real track, he comes around."

With his home province shuttered due to the coronavirus pandemic, Moore is in a similar situation to a number of Canadian horsemen looking for a place to race. His scenario is slightly different as he's also trying to get home from Florida while preparing his horses for races that might not happen.

"I've decided to leave Century Farroh and Lawless Shadow in Ohio with my best groom down here," noted Moore, stating that he expects to have his horses likely competing at Scioto Downs. "Lady Arthur is already up there ... we'll see what happens."

Moore previously indicated that Tattoo Artist would head to New Jersey into the stable of Chris Ryder for the upcoming legs of the Graduate, with the first of those set for Saturday at The Meadowlands. The weekend card at The Big M features a number of familiar faces from the Mohawk circuit, with James MacDonald joining the driving colony and Team Baillargeon — Sara and Ben — listed on the training side.

"It's amazing how many people have left [Ontario], but there's no end in sight, really."

Moore will be heading back to Canada with all of his two-year-olds plus three-year-olds Alumni Seelster and Andra Day, and that group will wait patiently for racing in Ontario to resume. Moore, on the other hand, is running low on patience.

"I'm going to write lots of letters. Public Health has not responded to me on the two emails I've sent first, which was April 7 with a detailed explanation of what we like to do and what we'd like an exemption for — just to look after the horses basically, that's it, not going to go anywhere else, not going to be responsible for everybody. But they haven't responded to me; one of the guys said [at the time] 'that's 11 business days.' I said, 'Okay, so sounds like they're not even working on weekends, you know, with all this going on.' You'd think they would be."

The horses are shipping north on April 29. Moore himself has additional details to tend to upon his arrival back in Canada as he recently sold the house he and his wife, Nancy, had been living in, and his new barn is nearing completion.

"My new barn is built, it needs some mats and a few things still ... screweyes and things like that. My son, Tyler, is on that now, so it should be good for Friday when I land."

As someone who has gone through the difficult nature of managing a Grand Circuit stable of horses from afar, recognizing that the nature of the border between Canada and the U.S. is not likely to change anytime soon, Moore is hopeful for a safe and imminent return to racing according to the schedule currently in place. Two of the races he might have had his horses pointed for – the Confederation Cup and the Camluck Classic – have already been cancelled, and not rescheduled.

"They're just cancelling it outright, $150,000, two years in row, gone, off the table. I don't why they can't schedule it some other time," he said, speaking of the Camluck Classic. "Same as the Confederation Cup. It's just gone.

"Last year, it was all about the North America Cup and everything and waiting for the Americans to get across. Well, the border never opened, and it's not going to open. So I said ‘They can do the same thing that we do. We send them to people in the U.S. if we want to race down there. If they want to race up in Canada, send them to somebody in Canada," stated Moore. "I found it really, really difficult to navigate and work around that stuff last year. Like I said, there’s a lot of money taken off the table that people all planned for and bought horses for and trained horses for. You know the story, I don’t need to tell you. If they start racing the first of June, it is my opinion that the North America Cup should go as scheduled when scheduled. If Perfect Sting and all those guys want to be in it, they can damn well do what we did for the last year and what we’re going to have to do this year. And if they don’t, to hell with them. That’s just the way it is.

"[Woodbine] waited last year and it made no difference, so there’s no point in waiting this year because that border’s not going to open. I guarantee you, not for a long time. They don’t know, nobody knows. It ain’t going to open in the near future, that’s for sure."

While some feel that the stature of the race is diminished if the connections of certain horses decide to skip races like the North America Cup, Moore countered with how much the Canadian harness racing industry suffers is a greater consequence.

"It’s going to really damage the Canadian horseman and the Canadian industry if they do start cancelling or postponing everything like they did before other than what they’ve lost in May. Obviously, they don’t have any choice in May. But if they’re going to start the first of June, go as scheduled. Everything. Don’t be putting Golds back here there and everywhere, messing everybody up. That’s what we’ve been training for, striving for, all these last several months.

"It’s going to do no good to delay that. It’s going to further hurt Canadian horsepeople that train and plan so much for it. Yeah, it’s extraordinary times but it doesn’t matter. They know how it works now to try and live with it."

In reply to I wonder if Century Farroh by ichaelm

Farroh will need a race or

Farroh will need a race or two to get tight but Doc and his crew will have him ready to roll against the best aged horses. I see a big year for Farroh, he will get that 1:47 mile. We are very proud of our boy at this little track.

I wonder if Century Farroh

I wonder if Century Farroh will do any racing at Northfield Park? If he does, he'll have to face the red-hot Southwind Amazon.