A pair of Always B Miki sophomore pacing fillies, So Irresistible and Incaseyoudidntknow, came right back to run their Bobby Weiss Series records to two-for-two with tallies in their respective $17,500 second preliminary legs Monday afternoon (April 12) at The Downs at Mohegan Sun Pocono.

So Irresistible came with an uncovered sweep on the second turn to grab command early in the backstretch, pacing out her own back half in :54.3 to stop the timer at 1:53 a length ahead of 35-1 shot Beach Crazy. Scott Zeron was again behind the Bruce Saunders trainee as she remained perfect in three seasonal starts for owners Charles and Julie Nash. 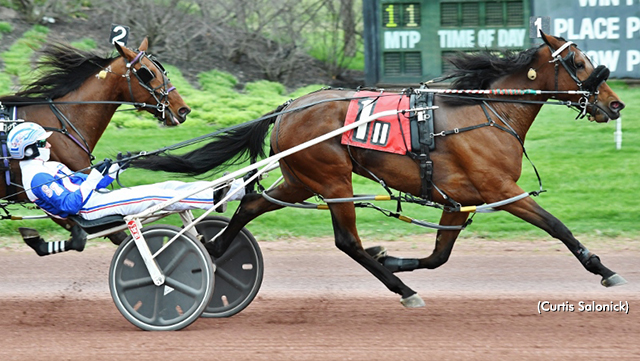 Incaseyoudidntknow became the fifth nose winner within a span of nine races at Pocono when she outdueled 28-1 shot Carrington after that one had gotten to equal terms with her in the Pocono Pike. Another first-week winner, Milieu Hanover, settled for third in the 1:53.1 mile. Marcus Miller, a three-time winner on the day, kept the career winner of six-of-seven starts alive late to win for trainer Les Givens and owners James Magno and Joseph Fonte.

The Weiss subtheme of “chalk defeats longshot” also played in the other series cut, as the Roll With Joe filly Roll On Mama made a successful debut for owner-trainer Gilbert Garcia-Herrera. The 8-5 chalk defeated 15-1 shot Baci Baci by one-and-a-half lengths while taking a mark of 1:53.1 under the guidance of George Napolitano Jr.

Also deserving mention is Toronto, another Always B Miki offspring and a sophomore colt out of double champion See You At Peelers. Toronto sped his individual back half in :54.2, brushing to the lead heading to the three-quarters for driver Tyler Buter and then breaking his maiden in 1:52.2 in just his second start. Robert Cleary conditions this talented individual for Royal Wire Products Inc.

Anthony Napolitano was star driver of the day with four visits to Pocono’s Victory Lane.

Tuesday’s (April 13) card will feature the second Weiss prelim round for sophomore trotting fillies, going in three $17,500 divisions. The only one of the first week’s three winners coming back on Tuesday, the Chapter Seven miss Trip Sevens, could be very tough to deny in her tenth race cut. First-race post time is at 12:30 p.m. (EDT). Program pages will be available at the PHHA website.