Driven by Joe Bongiorno, the four-year-old Well Said gelding prevailed in a lifetime-best time of 1:52.3, picked up his fourth-consecutive victory, and went off at a juicy 10-1 to boot.

Dragon Said and Diamondbeach had the two outside posts in the race, but they were by far the quickest away from the gate, with Diamondbeach getting command and Dragon Said landing in the pocket in a rapid :26.3 opening quarter. Diamondbeach then put on the brakes in the second quarter, getting to the half in :55.3. Cigar Smoking Tony took up the chase from first over coming to that marker, with Lous Sweetrevenge squeezing out into the second-over slot ahead of Retour Au Jeu.

Cigar Smoking Tony was able to advance up into second before the 1:23.4 three-quarters, but he began to drop back past that station. When no one behind him in the cover flow was able to fire, that left Diamondbeach and Dragon Said in a virtual match race coming into the lane.

Bongiorno already had Dragon Said off the pylons before they turned for home, and after a brief battle in the stretch, Dragon Said went by the leader. From there, Dragon Said widened his advantage, eventually hitting the wire two lengths ahead of Diamondbeach. Salt Life saved ground on the inside and was third, Rolling With Sam fourth and Scootnroll fifth. 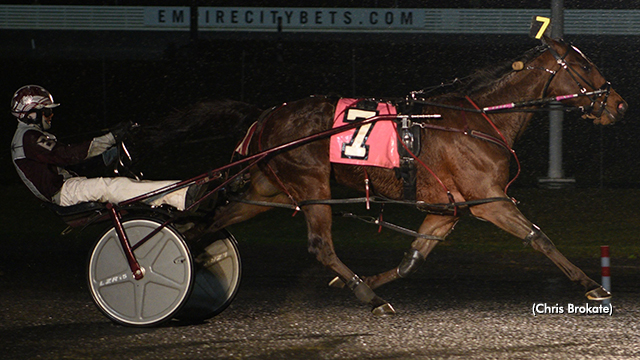 Stakes action resumes at Yonkers Raceway on Friday night (March 26) with a pair of $35,000 divisions of the third leg of the Blue Chip Matchmaker Series for pacing mares and continues on Monday night (March 29) with a trio of $40,000 splits of the third round of the MGM Borgata Series for free-for-all pacers. Alexa Skye, Blue Ivy, and Seaswift Joy N lead the entrants in the Blue Chip Matchmaker, and Backstreet Shadow, Hesa Kingslayer N, Lyons Steel, Rockapelo, and San Domino A are among the horses scheduled to compete in the MGM Borgata.