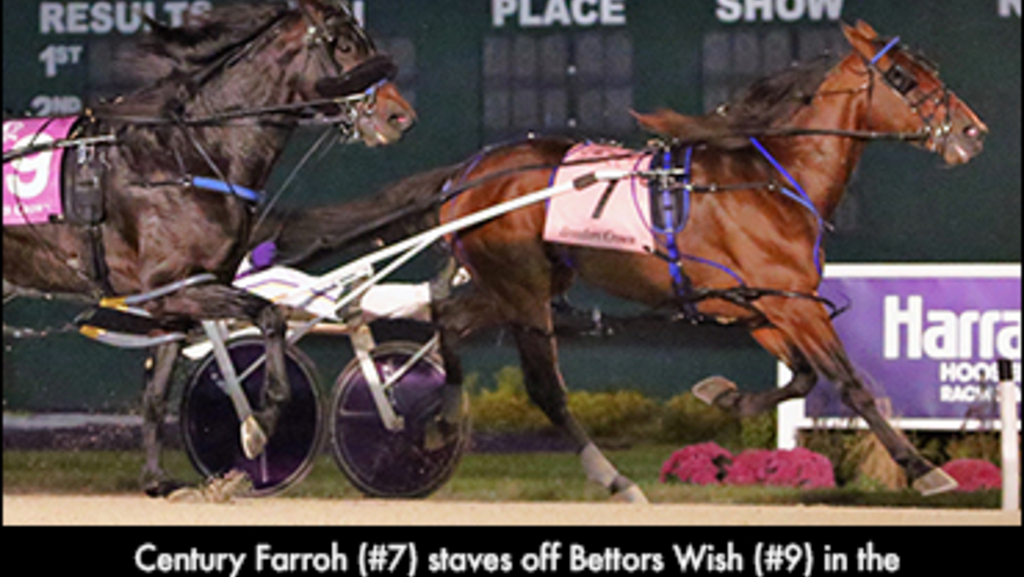 The first four finishers from the $500,000 Breeders Crown Open Pace – Century Farroh, Bettors Wish, Backstreet Shadow and This Is The Plan – will all meet again for a spectacular rematch Sunday evening (Nov. 15) in the $100,000 Potomac Pace Invitational at Rosecroft.

Since being inaugurated in 2016 by the Maryland Jockey Club, the Potomac Pace has played host to some of the sport’s best pacers, and Sunday night will be no different.

Burke, who will likely lead the United States in wins and purses for the 12th consecutive year, appears to have a strong hand. Backstreet Shadow, who will leave from post 2, led the field Oct. 31 in the Breeders Crown at Hoosier Park before finishing third behind Century Farroh and Bettors Wish. The five-year-old gelding previously raced wide while finishing third Oct. 11 in the Allerage.

This Is The Plan, who will leave from the rail, was up against it in the Breeders Crown, leaving from post 10. The five-year-old was a late scratch from last year’s Potomac Pace.

“I think — for Backstreet Shadow — the stretch at Hoosier is a little long for him,” Burke said. [This Is The Plan] had to start from the 10-hole, and that was tough.”

On his two horses drawing the inside, Burke said; “I couldn’t be happier. It’s a great draw. Century Farroh and Bettors Wish, those are two top horses. But we have the best spots.”

Century Farroh, winner of the Dan Patch earlier in the year, paced past betting favourite Bettors Wish in the late stages of the Oct. 31 Breeders Crown. Trained by Dr. Ian Moore and driven by David Miller, Century Farroh will leave from post 5 Sunday evening.

Bettors Wish, trained by Chris Ryder and driven by Dexter Dunn, is considered the top older pacer in the country with a 1:47.3 mark, $2.4 million in earnings, and a winner of 23 of 42 starts. The son of Bettors Delight, a Breeders Crown winner at two, Bettors Wish this year has won the Sam McKee Memorial, Dayton Pacing Derby, and Allerage Open Pace. He was the 2019 Dan Patch Award winner for best three-year-old male pacer.

Highalator, a six-year-old trained by Jenny Bier, comes to Rosecroft from The Meadowlands, where he has been one of the best overnight horses and has won five of his last six and seven of 15 this year. Rick Still will drive.

The remainder of the field is Star Align A, Leonidas A, World Of Secrets and Harambe Deo.

This Is The Plan