After giving Hanna Dreamgirl the opportunity to boost her confidence, owner Ken Jacobs and trainer George Ducharme will give the filly the chance to reestablish herself on the Grand Circuit.

Hanna Dreamgirl will bring a three-race win streak to Saturday’s (Aug. 17) $135,000 Dr. Harry M. Zweig Memorial for three-year-old female trotters at Vernon Downs. All three of the filly’s recent victories came in the New York Excelsior “A” Series, which is the tier beneath the state’s top sire stakes level.

In the start prior to her win streak, Hanna Dreamgirl finished 10th in a division of the Reynolds Memorial. She had not won a New York Sire Stakes division since her 2019 debut in early May. Last year, while in the stable of trainer Linda Toscano, she had a win in each the NYSS and Kindergarten Classic Series and finished third in the James Doherty Memorial. She also picked up cheques in the Bluegrass and International Stallion stakes. 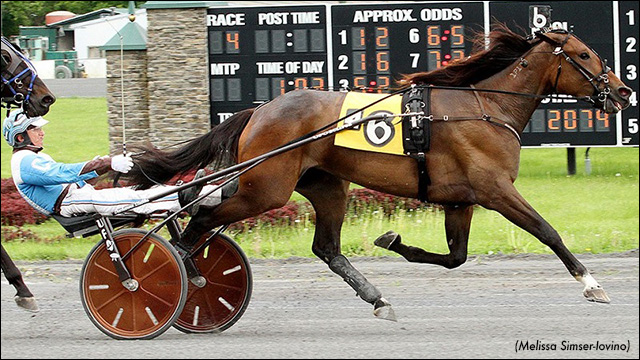 “Ken wanted to drop her down (to the Excelsior Series) and I fully agreed,” Ducharme said. “She was just chasing along in the Sire Stakes and was losing interest. She needed that (change). It seems to have really pumped her attitude up.

“This is going to be a pretty good jump for her, but Ken was willing to take the chance and see how she does back in the company we thought she would be able to go with.”

The Zweig’s main event for fillies includes Evident Beauty, whose four wins this year include a division of the Delvin Miller Memorial and the New Jersey Sire Stakes championship, as well as Reynolds Memorial division winner Starita and Continentalvictory division winner The Ice Dutchess.

Jacobs purchased Hanna Dreamgirl, then named Empress Crown, for $125,000 at the 2017 Lexington Selected Sale. The filly is by Chapter Seven is out of Shipps Empress. For her career, Hanna Dreamgirl has won seven of 24 races, hit the board a total of 15 times, and earned $176,972.

“We should get a better read on whether she can go forward the rest of the year after Saturday,” Ducharme said. “Against the competition she’s been in, it’s hard to tell where she is, but right now she seems mentally more prepared than she was even a month ago.

“I really believe a lot of it with these horses is mental. They get chasing every week and they get discouraged. She seems better around the barn and on the track. She seems happier.”

Hanna Dreamgirl is eligible to several stakes in the coming months, including the Hudson Filly Trot, Bluegrass, Kentucky Filly Futurity, and Breeders Crown.

“She is a good, solid-gaited filly, and you can leave with her or you can race her from behind,” said Ducharme, who trained Hanna Dreamgirl in Florida during the winter. “The biggest thing is can she make this next step up to go with the top fillies. If we can get her turned around, there is plenty of money left in the fall for her. That was our goal.”