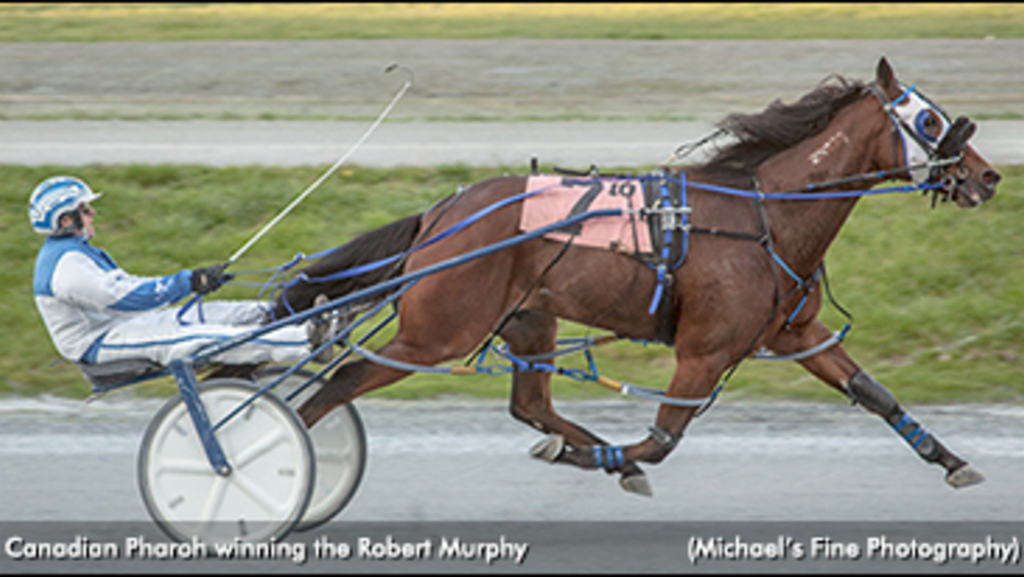 The Mach Three gelding took the top from 3-5 favourite Ron Bakardi heading into the first turn and toward a :27 opening quarter. From there Canadian Pharoh faced minimal pressure. Ron Bakardi sat tightly in the pocket through a :56.2 half and by three-quarters in 1:24.1 but driver Serge Masse edged Canadian Pharoh away from the public choice and widened his lead into the stretch. Ron Bakardi gave chase to take second while Solongo, circling three wide into the final turn, closed for third.

"The horse was ready to go I guess," Masse said after the race. "We took the front; (it) wasn't where I was supposed to be - the guy I wanted (to retake the lead) wouldn't apparently so we rolled. I would've been happy to have the two-hole trip and try to beat him anyway."

Winning his fifth race from 16 starts this season and his eighth from 22 overall, Canadian Pharoh competes for owners Veikko Pajunen and Rod Therres. The $9.90 winner lowered his lifetime mark of 1:55.1 taken in the final preliminary for the Robert Murphy.

After having been bet down to 2-5 at the windows, the John Hudon-trained and Serge Masse-driven The Blue Yak delivered on her pari-mutuel promise by pacing to a gate-to-wire win in a life’s best, as well as a track-record, 1:55.1.

Masse and the bay daughter of Big Jim-Im Bossy had the luxury of starting from the rail in the Millbank final and they sure didn’t squander their good fortune. After leaving from the gate, the duo shot out to the lead and cut the speed in :28, :58 and 1:26.1.

The Doug McNair-driven Mrs Suhwiggins made a first-up move from mid-pack in the third quarter, but it wasn’t enough to reel in The Blue Yak, who wasn’t seriously challenged before nailing the wire in 1:55.1.

The victory was The Blue Yak’s fifth consecutive win. The score bumped her career record to 5-0-1 from six starts and boosted her bankroll to $80,756 for Hudon, of Surrey, BC, who also bred and owns the filly.

“She was the best in there and she looked like it,” a victorious Masse said in a post-race interview. “The eight horse (Mrs Suhwiggins) took a shot, but we were really confident today.”

Masse went on to say that “the rail was the difference today, and we took advantage of it.”

Pocket-sitter Major Winker surged to the front into the stretch and held off early breaker and odds-on favourite Bettor Cat to take the $100,000 Robert Millbank Memorial final by two lengths in a track-record 1:54.1.

As 1-9 favourite Bettor Cat lost stride at the start Kootenay Mystery launched for the lead while Major Winker ducked into second four lengths from the front. Kootenay Mystery posted a :27.1 opening quarter and shrunk her lead as the tempo slowed to a :57.1 half.

Rockin N Talkin challenged first over moving towards the backstretch with Bettor Cat, behind 11 lengths at the quarter, recovering to track cover second over. Kootenay Mystery endured the pressure through three-quarters in 1:25 while Rockin N Talkin soon faltered to the outside. Bettor Cat, forced to circumvent fading cover, lost ground around the turn while Major Winker stuck close to the lead moving into the lane.

Kootenay Mystery owned a two-length advantage at the head of the stretch before giving way to Major Winker lunging past from the two hole. Bettor Cat rallied wide to snag second while Kootenay Mystery settled for third.

"I was leaving anyways," trainer-driver Dave Hudon said after the race of his game plan for Major Winker leaving the gate. "He's been chasing them two colts (Bettor Cat and Rockin N Talkin); they're pretty nice colts but I figured I'd have to be around to beat him. The colt really showed up today. He's a really nice horse and I don't think we've seen the last of him either."

With a first-over brush heading to the half, Scardy Cat cruised as the 1-4 betting choice to a 1:53.4 victory in the $100,000 Mary Murphy Breeders Stake final.

Driver Doug McNair placed the favourite fourth off the wings of the gate and soon edged outside to push for command approaching the first quarter. Glimpseofgoodness held control past the :27.1 opening panel before yielding command to Scardy Cat nearing the second turn in progress to a :55.3 half.

Custard Lite marched first over into the backstretch as Scardy Cat strolled towards the three-quarter pole. By that point in 1:24.2, Scardy Cat continued on the lead into the stretch unchallenged while Custard Lite fought to take second from Ynothos slipping through the open stretch into third. 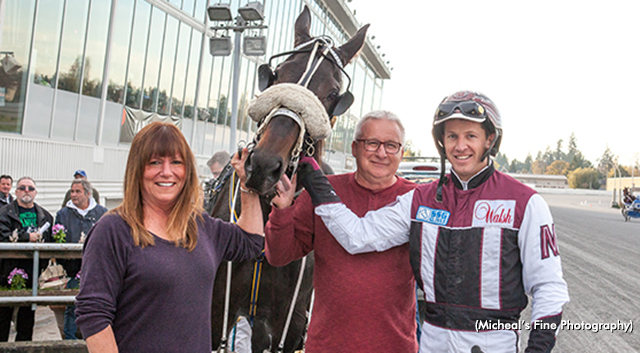 "The trainer told me she's not as handy as she looks on paper and she was right," McNair said following the race. "I was going to tuck her in there but when I decided to drive on I was just thankful Dave [Hudon on Glimpseofgoodness] released us past the three-eighths. When she made the front she did the rest from there.

"I figured they weren't going to catch her," McNair also said. "Even though she went a pretty good half to do it but they were going to have to come out and catch her."

Trained by Debra Mc Carthy for the J J J Stables, Scardy Cat won her fifth race from 13 starts this season and her ninth from 18 overall, earning $188,885. The daughter of Sportswriter returned $2.50 to win.