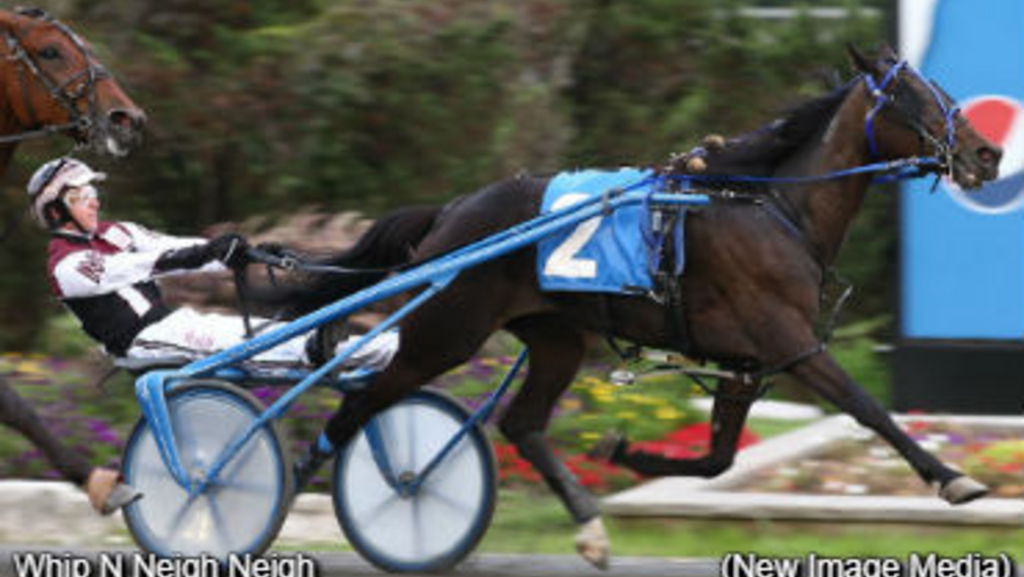 Thursday night marked the end of the Grassroots regular season for the three-year-old trotting fillies and Whip N Neigh Neigh wiggled up the inside and right into the post season with her first-ever Grassroots win.

“The trip worked out perfect,” said top Woodbine Mohawk Park driver Doug McNair. “She’s been knocking at the door, so it was nice to get a win.”

Kicking things off in the first $18,450 division, McNair and Whip N Neigh Neigh got away fourth and sat tight as Galary Girl took the field to a :28 opening quarter and :58.1 half. Around the final turn McNair tipped Whip N Neigh Neigh into the outer lane and the filly was making steady gains on Galary Girl and pocket-sitter Melanie G as they passed the 1:28.3 three-quarters. In the stretch McNair sent Whip N Neigh Neigh up the inside and the filly hustled home to a three-quarter length victory in a personal best 1:58.4. Fan favourite Melanie G took the right hand route around Galary Girl, who went off stride as she was being flanked, and finished second. Hay Darlene completed the top three.

“With a win today she should be in the Semi-Finals. So she’ll be there, race the Semi-Final, and hopefully the Final,” said Per Henriksen, who trains the daughter of Cornaro Dasolo for Adv Racing Stable LLC of Pawling, NY. “She’s just a sweetheart to be around and never do nothing wrong basically, and she came a long way since the beginning of the year.”

Whip N Neigh Neigh started the season with a tenth-place result in the June 7 event and followed that up with a fourth on July 8 and a sixth on July 21. In the August 27 event at Grand River Raceway she was sitting third when she made a late break and had to settle for fifth. Heading into Tuesday’s contest she was tied for 24th, just shy of qualifying for the post-season, but the victory boosted her point tally to 66 and will see her start in a Sept. 21 Semi-Final.

Pretty N Well took full advantage of an early miscue by heavy favourite Sorceress Seelster, winding up in the pocket spot behind Gotta Pay To Play just past the :28.4 quarter. Content to follow the pacesetter through the 1:00.1 half, driver Bob McClure sent Pretty N Well up the outer lane heading by the 1:29.3 three-quarters and then shifted the filly into high gear in the stretch. Pretty N Well reeled in Gotta Pay To Play and held off a late charge from Stormont Charlotte to record the neck victory in a personal best 1:58.2. Stormont Charlotte, who had also made an early error, finished second and Gotta Pay To Play settled for third.

“She’s a handy filly, she does everything right,” said McClure. “She’s really nice to drive and was able to capitalize on some breakers tonight.”

McClure crafted the win for trainer Mark Johnson and owner-breeder Denise Ball of Bailieboro, Ontario. The win was the Kadabra daughter’s second in Grassroots action this season and puts her in fifth spot in the standings with 101 points.

Fan favourite Hopes Solo also scored her second Grassroots victory on Thursday, stepping out of the pocket to catch pacesetter Magics Lucky Charm at the wire in 1:57.1. A scant neck separated the top two fillies and Miss Adam T was only one-half length back in third.

“She got a nice two-hole trip and fought hard in the stretch to win,” said driver Chris Christoforou, who steered the filly to her first Grassroots win in the August 27 event at Grand River Raceway. “I was very happy with her considering she had been battling some minor issues all week.”

The victory, the Cornaro Dasolo daughter’s third in a row, gives Hopes Solo a total of 125 points and second spot in the standings behind Ezee Tiguan. Christoforou pilots the filly for his father, trainer Charalambos Christoforou, and owner Carolyn Polillo and said they will wait to see how the filly bounces back from Thursday’s effort before deciding whether she will make an overnight start before the Sept. 21 Semi-Final.

The top 20 point earners will advance to the Semi-Final, with the top five finishers from each Semi-Final advancing to the Sept. 29 Grassroots Championship at Woodbine Mohawk Park.

On Friday night the three-year-old pacing colts and gelding will arrive at Woodbine Mohawk Park to wrap up their Grassroots regular season. The pacers will raise the curtain on the evening’s festivities at 7:10 pm in the first race and will also compete in Races 6 and 10.