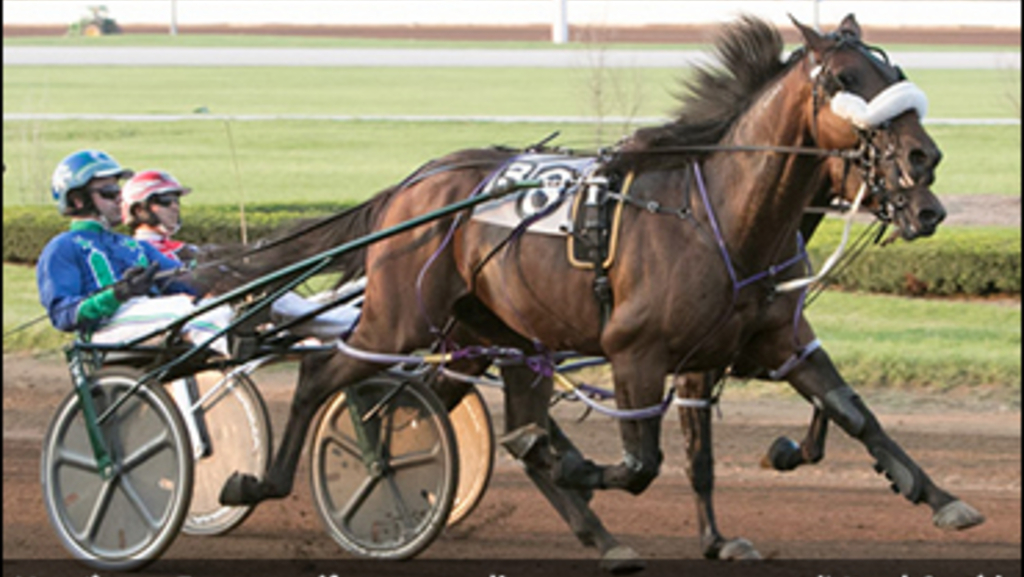 The Ohio connection of trainer Brian Brown and driver Chris Page began the evening by winning the first of two filly divisions with heavy favourite Edge Of Eternity. With the field scratched down to a mere handful of five, Page took the initiative and sent his charge out for the lead, rated friendly fractions, then sealed the deal with a :26.4 end to the 1:53 mile. Louphoria (Scott Zeron) rallied wide to be second and Cash Reward (Yannick Gingras) third.

The winner is by A Rocknroll Dance and was bred by Red Mile track announcer Gabe Prewitt and James McLaughlin, who sold her to current owners Mark Robinson, Richard Lombardo, Bluestreak Boys and Bob Heckhoff’s RBH Ventures for $55,000 at the Lexington Selected Yearling Sale last fall.

Beautyonthebeach became a repeat winner in the KYSS series for Doug McNair, who chose to race her with cover this week. There was plenty of pace in the race, with Summer Charm (Andy McCarthy) setting lively fractions through six panels in 1:23.4 just as Beautyonthebeach was escorted to the leader by live cover. McNair then tipped his charge wide for the drive, and she did her best pacing under the wire while striding out to a 4-1/4 length win in 1:51. Summer Charm held up well for the place and Mollydooker (Zeron) went a solid uncovered trip to be third.

James Avritt of nearby Lebanon bred and owns the winner, and was again present to enjoy the effort and accept the trophy.

Magic Joe Lindy (Zeron) seared the red clay in 1:51 to win the first of three divisions for colts and geldings. Zeron changed tactics with the striking gray American Ideal colt, leaving from post 8 into a brief four-hole tuck before advancing on leader Egomania on the backside to take over by the :55.3 half. Chris Page popped the pocket with Egomania at the 1:24.1 three-quarters for a run at the top one, but Magic Joe was more than up to the challenge and drew away to a 2-1/4 length win under minimal urging. US Captain (Doug McNair) closed to take second away from Egomania.

Magic Joe Lindy is a rare Lindy Farms pacer and the third homebred winner for that storied Standardbred nursery on the weekend. With trainer Domenico Cecere in route to Ontario to prepare others for the upcoming Champlain Stakes, assistant trainer Patrizio Ancora tended to the winning duties on this occasion.

Hurrikane Emperor (McCarthy) impressed again with his powerful closing kick, mowing down a pretty stout field from well back in 1:50.4 for trainer John McDermott Jr. The pace was hot early, with Major Deception (Zeron) prominent through speedy numbers before succumbing to an assault from a fresh Bettors Wish (Dexter Dunn) as they straightened up for the drive. That one was dead game right to the wire, but despite his gritty effort, Bettors Wish could not resist the winner’s late surge. Cant Beach That (Peter Wrenn) was third.

Hurrikane Emperor has now won five of six starts, including a sweep of the New Jersey Sire Stakes earlier this summer for breeders Jonathan Klee Racing and Kuhen Racing, joined in ownership of the Hurrikane Kingcole scion with Pegasis Investment Group and Lind Racing Stable.

McCarthy came back to win the last of the stakes with the unbeaten repeat KYSS winner Captain Trevor, another sharp looking Captaintreacherous colt for trainer Tony Alagna. Leaving for position early before moving to the front at the three-eighths, McCarthy and Captain Trevor yielded to favourite Blood Money (Gingras) near the half before finding a seam mid-stretch and going by the leader willingly for a 1:52.2 score. Caviart Rockland (McNair) held third after a first-over bid.

Racing resumes at The Red Mile on Thursday (Aug. 30) with the second Kentucky Sire Stakes leg for three-year-olds.