Western Stepp was in a league of her own Tuesday, June 19 as she routed her foes in the $14,000 Winners-Over Handicap for fillies and mares at Plainridge Park.

The race was over when the gate released the ladies because Western Stepp was on top in a flash. From that point on she maintained a gapped advantage over the scratch-shortened field while stopping the clock incrementally at :26.2, :56 and 1:23.1.

Western Stepp had easily opened up a six-length lead on her own coming off the far turn and driver Drew Campbell gave her a line-tap to let her know she was still in a race. She perked her ears, switched her gears and paced strongly into the lane. Campbell glanced over his left shoulder, saw no threat in sight and wrapped up the winner while sitting chilly, crossing the wire in 1:51.3.

The time was a lifetime mark for Western Stepp, eclipsing the 1:52.1 clocking she set just last week. 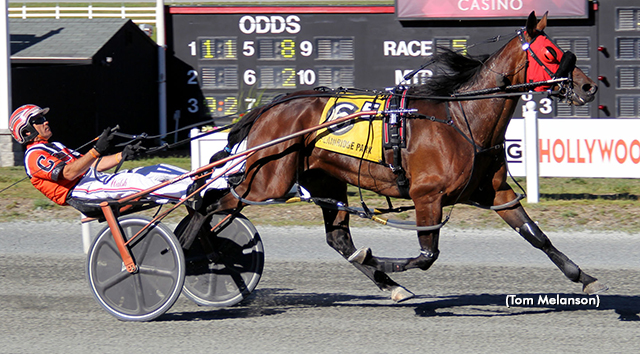 The first division of the “2008 Celts” $10,000 claiming series for fillies and mares was contested on Tuesday and Empty Gesture took an early lead that she never relinquished, progressing to a 1:53.1 score. It was the second-straight win and a seasonal mark for Empty Gesture, paying $3.20 to win, who is owned by William Emmons, trained by Jeff Lieberman and was driven by Shawn Gray.