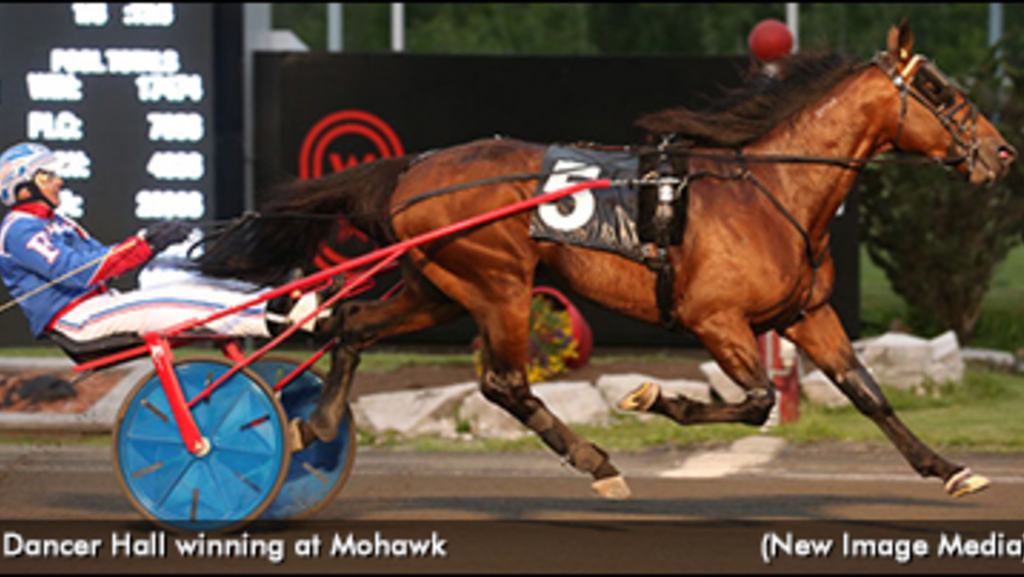 Dancer Hall recorded his second consecutive victory at Woodbine Mohawk Park on Tuesday, June 5. The Deweycheatumnhowe bay captured the first of two $22,000 featured trotting dashes on the card, as he won by open lengths in 1:53.3 in a wire-to-wire effort.

Sent the odds-on favourite, Sylvain Filion placed the Paul Reid-trained son of Deweycheatumnhowe on the lead through a :28.3 opening quarter. Catch The Dream, sitting fourth, pulled first over heading to the half and matched strides with Dancer Hall through a :58 clocking before moving into the pocket vacated by B Yoyo gapping from third. Dancer Hall held a two-length advantage on Catch The Dream passing three-quarters in 1:25 and expanded that margin through the lane, winning by five-and-one-quarter lengths in the end with Catch The Dream holding second from B Yoyo.

Wild And Crazy Guy took the other edition of the $22,000 conditioned trot brushing to the front after the half and holding on by a head to win in 1:54.1. Driver Doug McNair positioned the 5/2 second choice third through a :28 opening quarter before moving first over heading to the half. Clearing the lead from Whiskey Tax through a :56.3 half, Wild And Crazy Guy circled the final turn enduring first-over pressure from Touchdown As as they past three-quarters in 1:25. Touchdown As dug into Wild And Crazy Guy through the stretch, finishing second narrowly at the line while O Narutac Perfetto kicked home from third over for show.

A seven-year-old gelding by Crazed out of the Muscles Yankee mare My Babys Momma, Wild And Crazy Guy, owned by Y. Jean Brunet and Ted Gewertz, won his third race in 18 starts and his 30th in 135 overall, earning $460,904. Trained by Martin Lachance, he paid $7.40 to win.