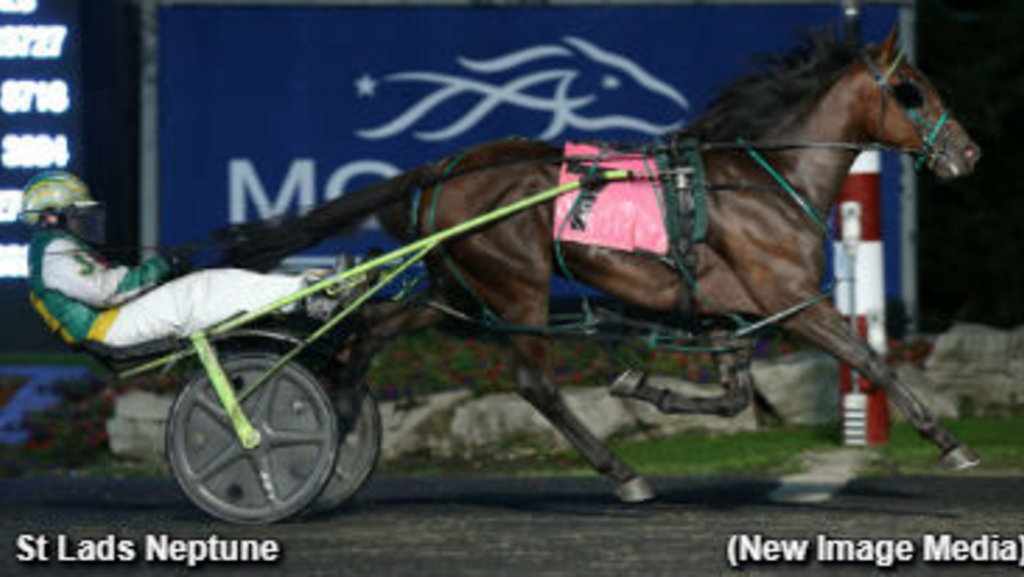 Seven of Monday’s eleven races at Mohawk Racetrack were dedicated to freshman performers of the Grassroots level of the Ontario Sires Stakes.

Pretty Handsome got things rolling for the pacers as he made multiple moves en route to posting a career-best clocking of 1:53.2 for the team of driver Jonathan Drury and trainer Andrew McCabe.

Drury powered to the lead from Post 6 with Pretty Handsome, and together they sliced out the first quarter in :28.1. Notabadgame rushed to the lead in the backstretch and took the group past the half in :56.1. He was still the leader at the three-quarter pole in 1:24.2, but Drury revved up the engine on his colt and Pretty Handsome used a :28.4 closing panel to win by 3-1/4 lengths over Notabadgame. Taking home the show dough was Lucky Match.

Sent off as the 4-5 favourite, the son of Mach Three-Pretty Thing improved his record to 2-1-0 from four starts for Glenview Livestock Ltd of Wallenstein, Ont. He’s banked more than $22,000 to date.

Jody Jamieson got away fourth with the even-money favourite, but he had him in top gear on the way to the three-quarter pole. After Durham Town threw down first-half fractions of :27.4 and :58, St Lads Neptune took over at the three-quarter pole in 1:27.2 before using a :29.3 closing panel to win by 6-1/2 lengths over Howmac Dancer. Durham Town took home third prize.

“Neptune has always shown ability, and to this point I haven’t even stretched him out yet,” said Jody Jamieson. “I think he’ll be in the Metro (Sept. 16) next, so that’ll be about as tough of a test as he’ll ever see.

“He’s had health issues all summer," he added. "My dad’s whole barn was sick in July and half of August,” explained Jamieson.

Trainer Carl Jamieson co-owns the son of Mach Three-Sunbather with Thomas Kyron of Toronto, Ont. He lifted his lifetime earnings to $29,150 with the win.

Wild West erupted for a 19-1 upset in the third division for the tandem of driver Phil Hudon and trainer Chad Milner.

The son of Badlands Hanover-A Votre Pante got away sixth and held that position through the opening half of the $19,850 affair. He was into the outer flow and was sent up three-wide as the field passed the three-quarter pole in 1:27.3. Hudon got the gelding to step home in :29.1 en route to winning by 7-1/2 lengths over Northern Rebel in 1:57.1. Letjimmytakeover rounded out the top three finishers.

“He has one good kick to him, so I was hoping the flow would take him to where he needed to go, and it did. He paced home handily,” said driver Phil Hudon, who tipped the gelding out three-wide at the three-quarter marker. “I drove him a few starts back (Aug. 8) and was first up with him early. He raced well then, but I thought if I used him late it would be more beneficial, and it was.”

James Crawford of Erieville, NY owns the youngster who celebrated the win in maiden-breaking fashion. He’s stashed away just shy of $15,000 to date.

The biggest upset of the night came in the final division when Gold Rush turned in a stunning upset to the tune of 54-1 for driver Chris Christoforou.

The son of Mach Three-Bow Wow Wine was still sitting last at the half, but he used a huge late kick to rally from fifth at the three-quarter pole to the top spot in the late stages of the mile. He used a :28.2 kicker to win by 3-1/4 lengths over Atomic Seelster in 1:57.1. When You Dance also closed well to finish third.

Trainer Gregg McNair shares ownership on the colt with Robert Chapple of Chatham, Ont. It was just the second lifetime start for the rookie who has banked just shy of $10,000.

Ladydini was the first winner among the trotting fillies, and she did so in upset fashion for driver Rick Zeron and trainer Scott McEneny.

All eyes were on heavily favoured P L Layla, who was the leader for most of the mile through fractions of :28.4, :58.3 and 1:29. The favourite lacked staying power, however, and that allowed Ladydini and others to get involved late. After sitting in mid-pack for most of the mile, Zeron activated his filly in the backstretch and she gained ground quickly before holding off late pressure from Billie Holiday en route to posting the neck decision over that foe in 2:00.1. Dalliance Seelster edged out P L Layla for the third prize in the $19,150 affair.

Sent off at odds of 5-1, the daughter of Kadabra-Bocha Mea won for the first time in seven tries. M And L Of Delaware LLC of Wilmington, DE owns the rookie who pushed her lifetime earnings over $13,000 with the win.

Sheza Chunkymonkey survived a first-over trip in her $19,500 affair to win for the second time in her career for trainer/driver Travis Henry.

The Majestic Son-Stonebridge Amanda miss got away fourth before going into attack mode on the way to the half. She chipped away in the back half and only needed a :33-second closing quarter to prevail by a half-length margin over race favourite Magical Lady. Princess Stephanie rallied to finish a lapped-on third.

“She was very overweight, to the point where we thought she was in foal, that’s where she got her name,” recalled Henry, adding that he considered giving up on the hefty filly during the earliest days of her education. “Maddi [Henry's wife who co-owns] trained her down, because I wasn’t a big fan. She just wouldn’t pay attention and would make breaks for no reason.”

Princeton Farms Inc and Maddi Henry share ownership on the lightly-raced lass who improved her record to 2-0-1 from five trips to the track. She’s banked $22,403 to date.

Ms Miller won as she pleased in the final division for the team of driver Louis Philippe Roy and trainer Joe Pereira.

Making her second start since being purchased privately, the daughter of Southwind Lustre-Zorgwijk Diamond came first-over and eventually drew clear to win by 3-1/2 lengths over Warrawee Trip in 2:03.1. Stonebridge Rhyme, who supplied fractions of :30.2, 1:01.1 and 1:31.3, faded to finish third.

William Johnstone and William Gillan of Thorold, Ont. own the two-time winner who lifted her lifetime earnings to $26,480 with the win.