Penn On Point At Miami Valley

It hasn’t taken long for Penn to return to his consistently sharp form. The open trotter is now two-for-two at Miami Valley Raceway following a three and a half-month layoff after copping the weekly $22,000 feature on Tuesday afternoon (Feb. 21) over a rain-induced 'sloppy' track.

Driver Jason Brewer was content to get away fourth as Boffin (Chris Page) lead the classy field to the quarter-mile marker in :28.4 and then Dont Rush (Dan Noble) did rush to the lead prior to the :56.4 midway point. Penn launched a strong first-over bid during the third split and stuck his head in front at the 1:25.3 three-quarter station. A :29.2 closing panel was enough to hold off a fast-closing runner-up Walter White (John DeLong) with Dont Rush garnering the show dough. 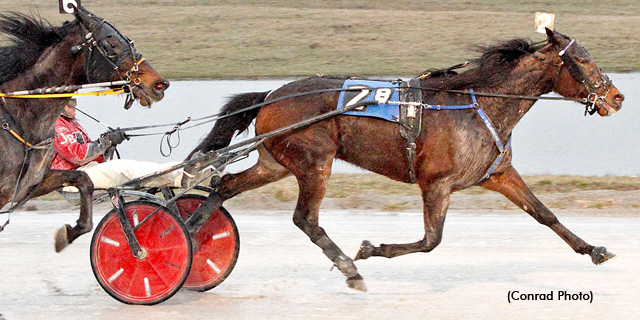 It was the 37th lifetime win in just 87 starts for the seven-year-old son of Master Glide, who is owned by Barkley Counts of Tennessee. Bobby Brower trains the career winner of $328,573, who returned $3.80 to win as the 4-5 favourite.

A pair of penultimate third-round elimination heats of a four-week Survivor Series for $5,000 claiming horse and gelding pacers were also presented on Tuesday, with the top five finishers from each slated to return for a lucrative $20,000 championship tilt on Feb. 28.

In the first elimination, favoured Mosh Pit (Kayne Kauffman) successfully employed the “quarter move” to clear to the front and then lead his adversaries the rest of the route to a 1:55.2 triumph. Owned and trained by Deborah Swartz, the seven-year-old Rocknroll Hanover gelding started the series with a place finish and has now reeled off two consecutive wins to establish himself as one of the favourites in next Tuesday’s ultimate showdown. Others punching tickets into the final were Ricky Tidwell (Simon Allard), Munndutch (Jeremy Smith), Rock Of Luck (Andy Shetler) and Wilburs Z Tam (Jason Beattie).

Amasa Al (Randy Tharps) captured the second elim with a 1:55.1 triumph over Shakerattlenrock (Brady Galliers), Hay Goodlooking (Greg Grismore), Volo (Simon Allard) and Jagger Blue Chip (Kayne Kauffman). The 11-year-old gelding, who also scored a runner-up finish and two wins in the eliminations, will be racing for new connections as Chris Choros claimed Amasa Al for $7,200 for the Jeff Brewer Stable. He has changed hands after each of the three preliminary weeks and was owned and trained by Robert Cook for this victory.

(with files with Miami Valley)